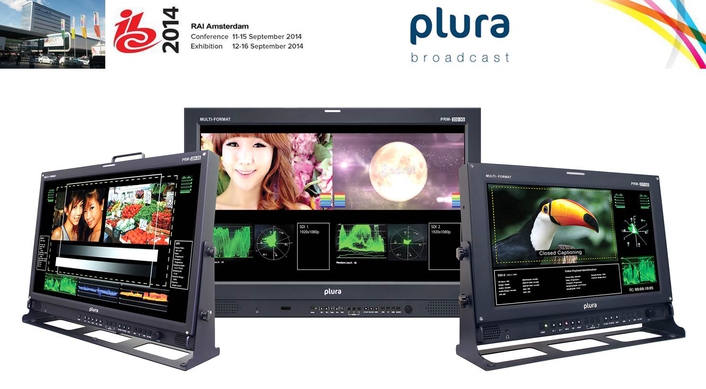 The new features, to be demonstrated on the Plura Broadcast stand at IBC2014 (September 12-16, RAI Convention Centre, Amsterdam, Stand 8.B73) represent a software-driven evolution of the company’s leading SFP-3G and PRM-3G monitoring portfolio.  This is a continuation of company strategy that aligns its portfolio with the changing requirements of broadcasters and production professionals in the digital television age.

“Plura has blazed the trail for all-in-one monitors, eliminating the confusion and complexity of mix-and-match modules and options that many vendors still require of their customers today,” said Ray Kalo, president, Plura Broadcast.  “Our vision for broadcast and production monitoring remains integrated functionality of rich feature sets within sleek, easy-to-manage platforms.  This ultimately minimizes costs for our customers while increasing the reach and power of their monitoring environments.”

For broadcasters worldwide, Plura Broadcast will extend software-defined loudness monitoring and logging functionality within the same two monitor families — saving its customers another several thousand dollars in additional component and integration costs.  The company, which currently offers standard live monitoring of digital audio loudness LFKS levels — essentially the amplitude level of TV audio converted into decibels — will introduce new timeline-centric features that allow broadcasters to quickly review and troubleshoot fluctuations in audio loudness over a given time period.  The Plura Broadcast monitors log all LKFS activity on a continuous basis, and provides graphical representations on screen via a built-in HDMI output.  This enables broadcasters to better understand when and where fluctuations took place, and troubleshoot issues to prevent further occurrences.

The integration of V-Chip technology is of special interest to North American broadcast stations and networks that must transmit ratings data for content that specifies suitable viewing audiences.  The integration of this technology into Plura monitors gives broadcasters peace of mind that this sensitive data is being delivered on screen without hiccups.  It also saves several thousand dollars for broadcasters who would otherwise be forced to purchase separate units and integrate them within existing workflows.

The integration of these new features follow other recent built-in software developments for its monitors, including simultaneous waveform vector display of LKFS for side-by-side comparison and manipulation of two images; and 16-channel audio monitoring, which doubles the capacity of most competitive broadcast and production monitors.  These features, along with 17-inch HD panel configurations for QC monitors, serve as key differentiators to competitive monitoring solutions on the market.