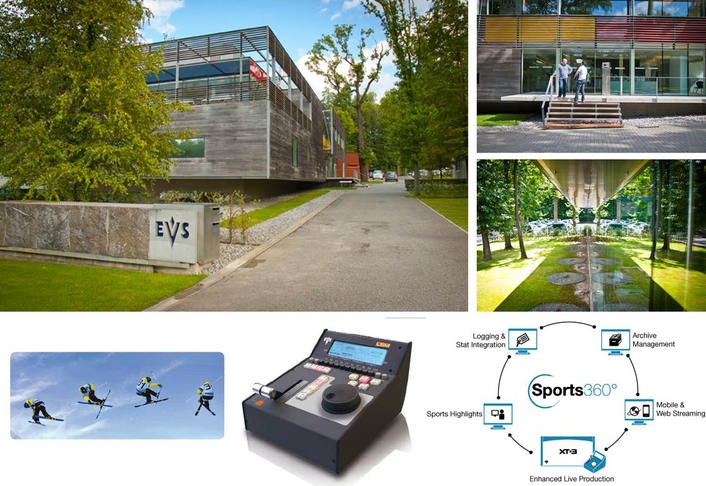 EVS Headquarter in Liege
EVS is in the broadcast and production business since 1994 years. It was founded by Pierre L'Hoest, Laurent Minguet and Michel Counson. From the beginning EVS efforts were focused on the digital recording of video images on hard disks. Together with Panasonic  EVS developed the first SuperSloMo hard disk recorder for Panasonics SuperSloMo camera for the Olympic Games in Atlanta. The successful replay of the SuperSloMo pictures from the Atlanta games enhanced the international reputation of EVS.

In the following years EVS opened offices in the United States, Hong Kong, Italy, the United Kingdom and in France (1998) because of its involvement at the FIFA World Cup. In preparation for the Olympic Games in Sydney NHK asked EVS to develop an HD SuperSloMo hard disk recorder. For the FIFA World Cup in Japan and South Korea in 2002 EVS deployed the XT platform and delivered more than 80 networked hard disk recorders.

2003 signaled the real take-off of high definition television in the USA, South Korea, Australia and Japan. EVS responded with the launch of the XT[2] television platform in 2005 which allowed the efficient transition from standard definition to high definition images. In the same year EVS expanded its activities into new projects by enabling near-live workflows in studio production.

At the FIFA World Cup in Germany (2006) EVS assisted all of the large television networks in the world with more than 200 EVS systems on location at the IBC and at the HD OBVans at the stadiums. The new IPDirector architecture used at the IBC of this mega production enabled the FIFA host broadcaster HBS to send various signals (SD and HD) to more than 900 million viewers worldwide.

While there were no major sporting events in 2007, EVS invested in R&D, opened new foreign offices to prepare the future growth in the promising segment of HD studios.

The summer 2008 was dominated by two sport events: the UEFA EURO in Austria and Switzerland and the Summer Olympic Games in Beijing. During these major events all OBVans were exclusively equipped with EVS servers. Numerous TV stations covering these events also used EVS Solutions and the host broadcasters (UEFA for the EURO and OBS for the Olympics) used EVS technologies for the media server within the IBC. Alone for the Olympics more than 700 XT[2] servers were in operation throughout the world.

The lack of big sport events in 2009 combined with the economic crisis with a negative impact to the whole broadcast industry, also had an influence on EVS' activities. Despite this tough environment the company continued its investment in R&D and developed new solutions mainly for the studio market (e.g. XS, Insio or Xedio).

In 2010 EVS technology was selected by the host broadcasters (OBS and HBS) in charge of the production of the Olympic Winter Games in Vancouver and the FIFA World Cup in South Africa as the preferred technology provider for the acquisition, storage, editing and media management operations of these audience breaking events. And on 6 May Sky News became the first European HD channel based on a full EVS integrated production system.

Since that time EVS continued to innovate by launching the XT3, the third generation of its XT servers and C-Cast, the first system for the delivery of complementary content, including multiple camera angles to second screen platforms. C-Cast is part of Sports360, a new concept introduced by EVS which covers all aspects of sports media, from live broadcasting to new media distribution.

Since that time EVS continued to innovate by launching the XT3, the third generation of its XT servers and C-Cast, the first system for the delivery of complementary content, including multiple camera angles to second screen platforms. C-Cast is part of Sports360, a new concept introduced by EVS which covers all aspects of sports media, from live broadcasting to new media distribution. 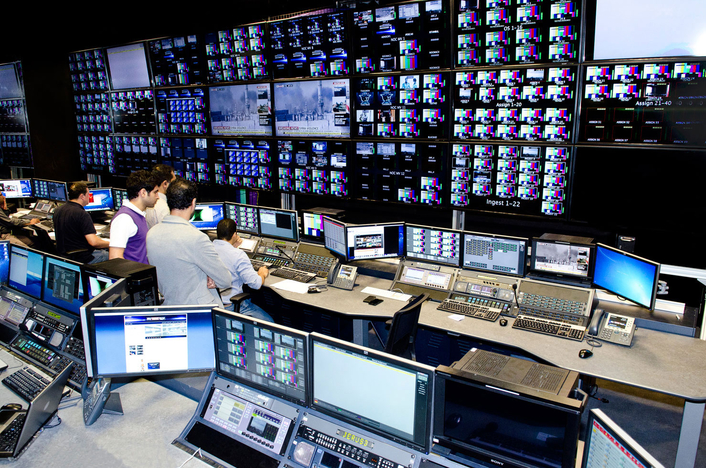 The company continued to gain traction in news production, winning a major contract to provide a fully-integrated solution for Sky News Arabia, a new 24/7 Arabic news channel which launched in May 2012. 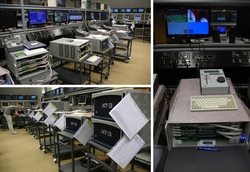 As of today 5.924 field-proven servers are working in the broadcast market and more than 6.000 LSM operators are on nearly every location where sport events are happening. Today’s core products XSnano, XTnano, XS abd XT3 high speed video servers in combination with the LSM controllers with a range of dedicated software for the essential functions for live sports, like instant playback and live slow motion, clip and playlist management, replay while in record mode or split screen mode. In addition to the support of double and triple speed super motion cameras in SD/HD/3D EVS controls all of the existing ultra motion systems for hyper motion replays.

EVS has enhanced its content management suite of applications with the control of multiple A/V channels, file import, logging and browsing including media sharing and network management. Combined with on the fly editing systems - which are fully interoperable with Avid and Apple FCP crafts editors - already on location true timeline editing without file rendering, color corrections, voice-over recordings and on air editing is possible. 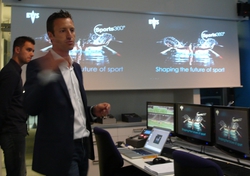 Integrated in the MulticamLSM are live and downstream graphics. This enables the slow motion operator to insert instantly virtual offside lines in the replays, insert a free-kick circle or include brand logos. The portable and removable storage solution XFly enables the operators to export a whole football match with the associated metadata to other production or post-production facilities.

All these tools and products enable the users to shorten the TV production cycles, enhance the live coverage, deliver the content to the connected screens (first and second), deliver to the archive and repurpose the archived content which all helps to shape the future of sports. This year's winter and summer events again saw and will see the EVS Sports360 applications providing maximum efficiency for these demanding sports events where deadlines are extremely tight and the viewing audiences are billions.