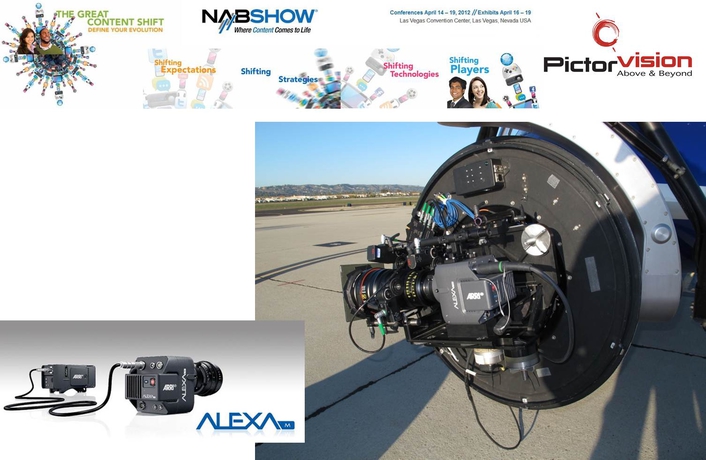 Pictorvision, which won an Academy of Motion Picture Arts and Sciences Scientific and Engineering Award this year for their innovative Eclipse system, was recently tapped by ARRI to help create a stunning in-booth promo to be shown at NAB 2012 in Las Vegas.

The first aerial use of the Alexa M, the promo demonstrates the compact size, light weight and modularity of ARRI’s versatile new camera. “We wanted to show the great advantage of using ALEXA M for aerial photography,” explains Stephan Ukas-Bradley, Manager, Digital Production of ARRI Inc. “The Eclipse seemed to be the perfect match for the new ARRI camera.”

Ukas-Bradley called on cinematographer Bill Bennett ASC and the two worked with Pictorvision’s Tom Hallman to create a variety of aerial shooting opportunities. “It was exciting to be the first company to take this camera up in the air,” says Hallman. “We pulled out all the stops and were able to integrate it into the Eclipse system quickly.”

Bennett explains, “We put the ALEXA M camera body inside the helicopter, allowing my camera assistant to easily change data cartridges on the Codex recorder and manipulate the various camera controls. The camera body was connected to the camera sensor block in the Eclipse mount with a very robust fiber optic cable.”

Pilot Peter McKernan took the Eclipse on quite a ride, at first helping the ALEXA M capture footage of 18-year-old Sam Mason flying his parent’s restored Stearman biplane then shooting scenic views of the Santa Monica Pier, the Hollywood sign and downtown Los Angeles at sunset.

“Pictorvision was a great collaborator and supporter on this project,” adds Ukas-Bradley. “The Eclipse is a great tool for aerial shots because it allows quick installation, convenient and intuitive handling of the camera.”

The stunning aerial shots captured with Pictorvision’s Eclipse and ALEXA M will be seen on a large screen in the ARRI booth at NAB 2012.