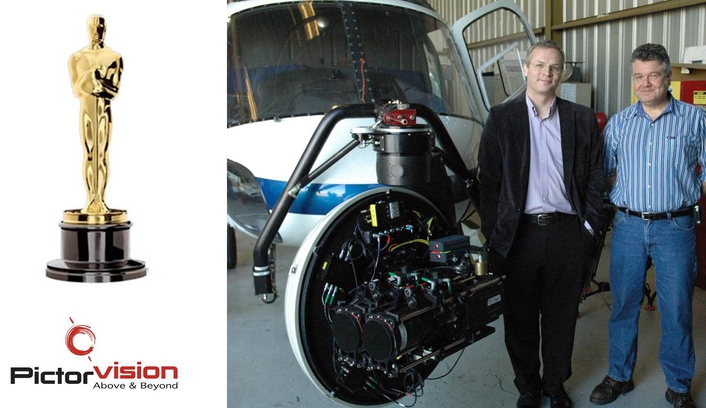 Michael Lewis and Michael Vellekoop of Pictorvision with the Eclipse system
The Academy of Motion Picture Arts and Sciences will honor the Pictorvision Eclipse designers with a Scientific and Engineering Academy Award at the 84th Annual Academy Awards for Technical Achievement. This prestigious award will be given to Michael Lewis, Greg Marsden, Raigo Alas and Michael Vellekoop for the concept, design and implementation of the Pictorvision Eclipse, an electronically stabilized aerial camera platform.

Designed by the same team who pioneered aerial stabilization for cameras 35 years ago, the Eclipse represents a revolutionary milestone in the advancement of aerial camera platforms. It incorporates proprietary patented XR Motion Management technology that enables the most advanced steering, stability and pointing and tracking capabilities.

About Pictorvision
Pictorvision is the first and only company to offer an entire line of Eclipse, Wescam, and Cineflex gyro-stabilized aerial camera systems for capturing thrilling images from above and beyond. Whether the production calls for 3D, HD, 35mm, 4Kdigital, IMAX 35mm, cost-effective SD, or anything in between, Pictorvision’s goal is to provide a tailored solution for each project. Revolutionizing a new generation of aerial camera systems, the Eclipse offers the most advanced steering, stability, and pointing capabilities available on the market. Partnering with the world’s most creative Directors of Photography, our engineering team integrates user functionality with industry-defining technology, to usher in a new dawn of aerial cinematography.

The Academy of Motion Picture Arts and Sciences
Pictorvision