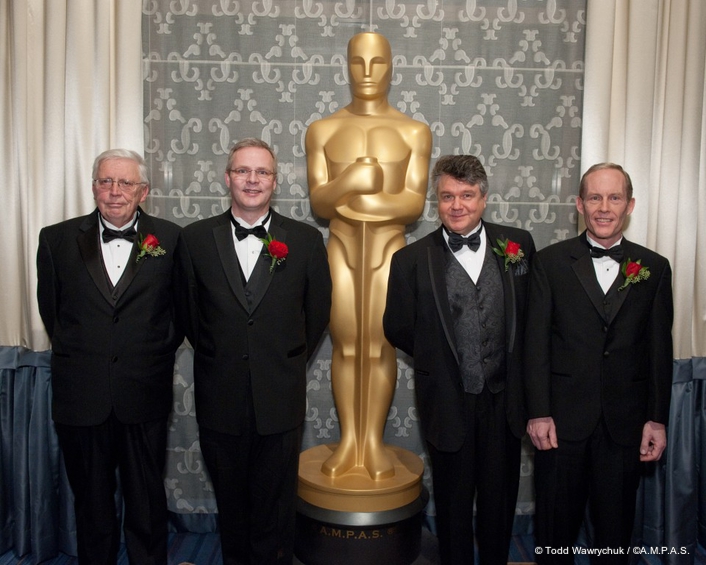 From left to right: Award recipients Raigo Alas, Michael Lewis, Michael Vellekoop and Greg Marsden
Michael Lewis, Greg Marsden, Raigo Alas and Michael Vellekoop were among the 30 honorees to take the stage at the 2012 Academy of Motion Picture Arts and Sciences Scientific and Technical Award ceremony, hosted by “Resident Evil” star Milla Jovovich, and held at the Beverly Wilshire Hotel, Beverly Hills, CA. They picked up an award for the design and implementation of Pictorvision’s Eclipse, the electronically stabilized aerial camera platform that was used on five of the 2011 top 10 highest grossing live action films.

Upon presenting the award, Jovovich explained that “For the Eclipse, the traditional method of 3 axis spinning gyro stabilization has been replaced. The new system uses an inertial navigation system and active servos to bypass this configuration. Two of the axes are used for steering and pan and tilt. The other 3 are mounted within the steering cradle to stabilize the camera. This separation of steering and stabilization results in a system with very high bandwidth stabilization and faster and more precise steering. This all results in the Pictorvision Eclipse system allowing cinematographers to capture difficult aerial footage at faster flying speeds with aggressive platform maneuvering.”

Accepting the Award, Michael Lewis credited now deceased aerial technician Gary Childs, for his many contributions to the project and larger than life personality. Both Lewis and Vellekoop also thanked Mark Chamberlain, current Chairman of PV Labs, Pictorvision’s parent company and past president and CEO of Wescam, for his encouragement and investment in new technology for the cinema business.

All 4 recipients were part of the same team who pioneered aerial stabilization for cameras 35 years ago. The Eclipse represents a revolutionary milestone in the advancement of aerial camera platforms. It incorporates proprietary patented XR Motion Management technology that enables the most advanced steering, stability and pointing and tracking capabilities.

High profile aerial cinematographers such as David Nowell, Kurt Soderling, Doug Holgate, Hans Bierno and others have taken Eclipse to the air for 100s of shoots including major car commercials, titles and footage for network television series as well as international studio feature productions. They count on Eclipse’s advanced control system, open architecture and ability to handle long and cumbersome lenses to capture creative shots never before attainable.