Pictorvision captures exciting footage for "Clash of the Titans" 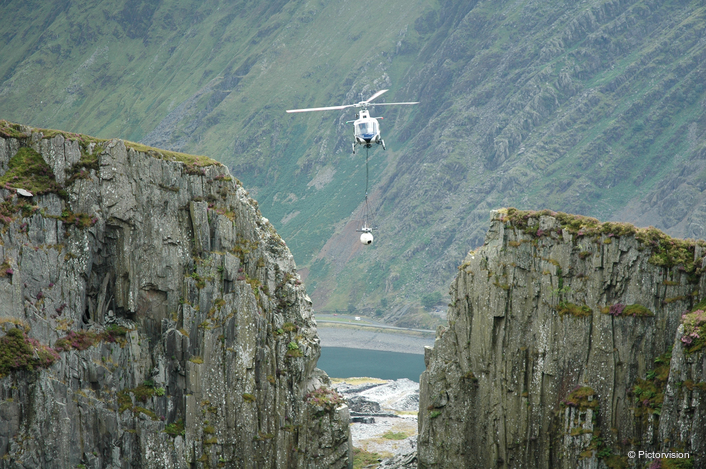 On the Set of Clash of the Titans in Tenerife
Pilot Fred North has just completed his second project for director Louis Leterrier, and his first with Pictorvision’s new state-of-the-art Eclipse helicopter camera mount system. “I did Leterrier’s last movie with a different system,” says North. “It didn’t have a perfect horizon level and could not look straight down. For Clash of the Titans, Louis and cinematographer Peter Menzies Jr. wanted to have a different system with perfect horizon level at all times to fly at a speed approaching 135 mph through steep canyons in Tenerife (Spain) and be able to look straight down. So I suggested the Eclipse and they confirmed it.”

A week before shooting, Leterrier requested that North and aerial cinematographer Hans Bjerno capture a series of rather “long line” shots in Wales (UK). Pictorvision’s Tom Hallman, his technical team, and freelance technician Peter Graf rose to the challenge. “Long line shots are dangerous and only a handful of pilots are qualified to do them,” says Hallman. “To give Fred and Hans what they needed to allow them to fly up to 70 knots through a narrow crevasse into a slate mine, while hanging the system from a 50 foot cable and keeping the camera stable, was no small matter. Peter worked with our technicians to design the long line anti-torque kit and then built a custom tail rudder on set. It’s that can-do attitude and willingness to push the technology that makes it so much fun to work with professionals like Fred, Hans and Peter.” 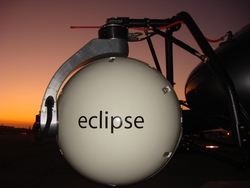 At the core of the Eclipse’s superior stability is the patented XR Motion Management technology, enabling the most advanced steering, stability and pointing capabilities available on the market. The Eclipse will not topple, provides an absolute level horizon and also features faster start-ups and resets. “Tom Hallman and the Pictorvision team gave me an incredible amount of technical support,” says North. “Something that we never had in the past. The Eclipse is reliable and gave me the ability to capture much more compelling footage than ever before with shots no other aerial rig can do, whether we’re shooting with the ARRI 435 as on Clash, or a Sony F35/F23, Genesis or Red One with lenses as big as the Panavision 11:1. The Eclipse and Pictorvision have now become my best choice for aerial photography equipment. You’ll be able to see the exciting work and very different shots on the screen.” 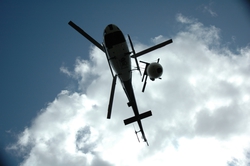 Pictorvision is proud to introduce the eclipse – the first truly revolutionary advancement in aerial camera systems in a generation. Designed by the team who invented aerial stabilization over 35 years ago, and in partnership with cinematographers, the eclipse embodies a commitment, focus and passion for aerial cinematography. Pictorvision’s engineering group – the team behind every major advancement in aerial stabilization – partnered with the world’s most creative DP’s to develop the eclipse, ushering in a new dawn in cinematography. The Pictorvision eclipse featuring XR Motion Management technology enables: • Highest level of stability • Unmatched precise and responsive steering • Geo Steering • Will not topple • Absolute level horizon • Faster Start-ups and Resets