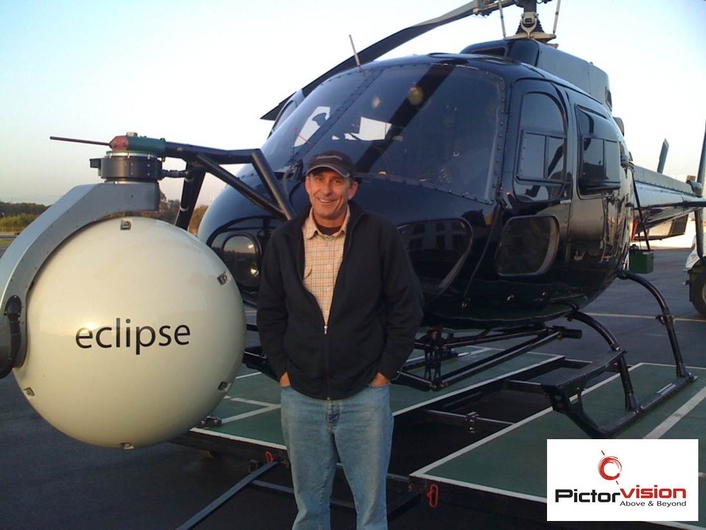 Holgate also used the GPS Tracking System on location in Santa Fe when he was doing running shots approaching the town
Aerial Cinematographer Doug Holgate had a busy year. He’s gone around the world several times shooting footage for major features. And his favored aerial set up starts with Pictorvision. “One of the great features is the GPS tracking system integrated in the Eclipse,” he says.

Eclipse offered Holgate superior stability through the patented XR Motion Management™ technology and it gave him the most advanced steering, stability and pointing capabilities available on the market. Plus it offered an absolutely level horizon and faster start-up and reset. “It also allowed me to capture many shots that required extreme precision and tracking,” he adds.

On one particular feature, Holgate’s assignment was to capture a blind reveal shot of a government compound where the hero was being held captive. Shot on location in Santa Clarita, California, Holgate’s helicopter was to follow the picture vehicle on a dirt road and then “overfly it to take us over a knoll to reveal the compound,” he explains.

“With the GPS tracking system I was able to see exactly where the compound was located by a reticle showing up on my monitor. I could also actively track the compound by switching from passive, which only shows where the target is without tracking it, to active, which locks the system on the target and holds it, no matter what the helicopter does.”

Holgate also used the GPS Tracking System on location in Santa Fe when he was doing running shots approaching the town. “CGI was going to put an object into the shot, then ramp the footage to make it look like the object was moving faster,” he explains. “The GPS system provided a perfectly stable image as it held the town during our approach. It was a windy day and we were getting buffeted pretty well. We were doing the approach from two miles out, low level, so there was no way to see the town until we were close. Any correction in pan would have ruined the effect.”

Holgate also recalls a third incident where Eclipse’s GPS proved invaluable. He was on location in Hawaii, using the cliffs of Molokai to hide the bay where surfers were paddling out. “And, I’ve used it several times for steadier shots on VFX work, setting up for the input of spaceships, explosions and other CGI images.

“I’ve had a great year,” says Holgate, who shot aerials on films such as “Thor”, “Skyline”, “Soul Surfer”, “Charlie St. Cloud”, “The Soloist”, “Seven Pounds”, and commercials for Old Navy and Callaway Golf. “Pictorvision’s systems have been a big part of my ability to get stunning aerial images.”