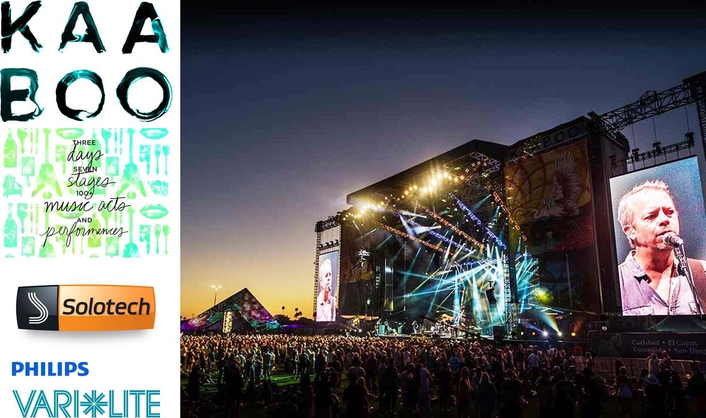 Created by music lovers for music lovers, KAABOO is a three-day event that combines rock-n-roll, world-class art, and the finest culinary cuisines to appeal to all five senses. Located in Del Mar, CA, it is described as the ideal live music event that takes place in a wonderland off the shores of the Pacific Ocean. For the 2015 KAABOO, Lighting Designer Chris Lisle was brought on by Production Manager Jim Dorroh, and he worked with Solotech to create a powerful and expansive rig using 36 VL4000 Spot, 41 VL3500 Wash and 12 VL3500 Wash FX luminaires.

“While this was my first year working with KAABOO, Associate Designer Erik Parker and I knew that we needed to provide a rig that would be easy to clone to/from the touring artists normal show file,” began Lisle. “A good mixture and placement of wash, spot, and beam fixtures is always critical, and since I’ve used Vari-Lite in my designs for years, I knew they would be a hit for the incoming LD’s.” 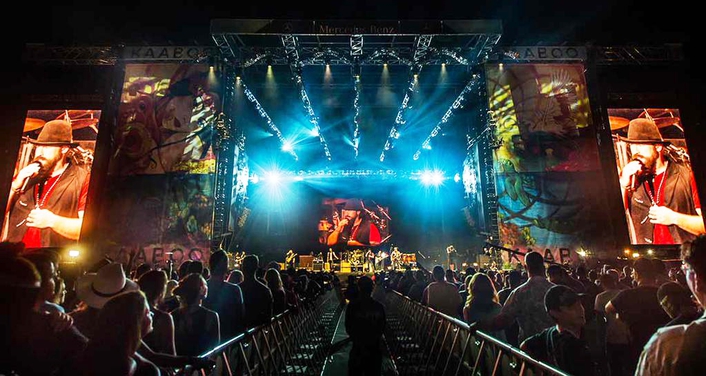 Getting started with the design layout, Lisle and Parker began looking at the rigging points provided by KAABOO to decide where they might be able to place the Vari-Lite luminaires throughout the design. Understanding the varying preferences of the artists who would be performing, they needed to find the delicate balance between lighting diversity and functionality.

“In the design, we wanted to give all the artists the most diverse lighting options possible, but still make sure the rig would go up and down easily,” explained Lisle. “To accomplish this we decided to use the Vari-Lite luminaires primarily on the main stage because they have great optics, a wonderful output, and many other fantastic features that lighting designers really love to dig into.”

The Philips Vari-Lite VL4000 Spot luminaire uses state-of-the-art technology to bring new features and innovation to productions around the world. Based on a Philips 1200W Fast-Fit lamp, the luminaire achieves over 33,000 lumens of output and also includes the all new Infinity color mix system, a 9-47 degree zoom, dual rotating gobo wheels, two adjustable animation wheels, framing shutters, an independent rotating prism with divergence control, variable frost and more.  Additionally, a new selectable Studio mode now allows designers and technicians to further reduce the noise level of the luminaire and operate with an output of 25,000 lumens when desired.

Lisle continued, “We placed the VL4000 Spot and VL3500 Wash luminaires on the ‘five finger’ trusses in an alternating pattern in order to lay a good base of color and beam effects with gobo pattern projections when needed. We then placed the VL3500 Wash FX luminaires in the main stage wings and used them for their big aerial capabilities.”

“With the amount of Vari-Lite luminaires we had in the rig, we were certainly able to create some nice, big looks with a ton of horsepower,” concluded Lisle. “I really like Vari-Lite luminaires because they hold up very well to the unpredictable weather elements that outdoor festivals bring and they are very user-friendly for incoming LD’s. Also, for tour designs that may need to clone from another fixture, the Vari-Lite luminaires work outstanding as they offer a complete package of power, optics, color and many other design capabilities.” 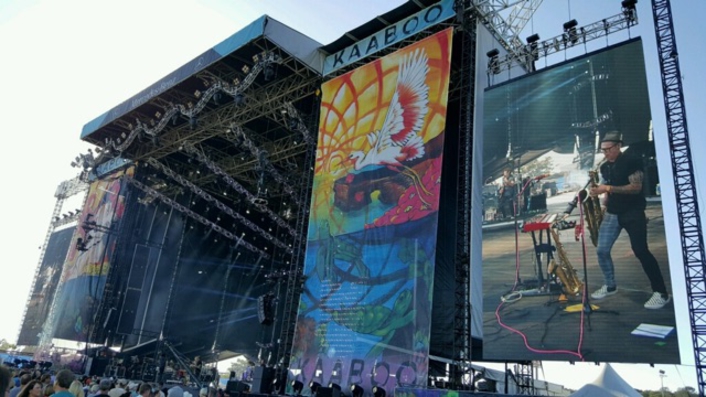