The Al Mayadeen and the Télé Liban studios are benefitting from lighting solutions of Philips Selecon and Strand Lighting
Lebanon's first public television network Télé Liban and pan-Arabist satellite television channel Al Mayadeen have tuned in to the power of Philips Selecon LED and professional studio lighting solutions from Philips Strand Lighting in a major upgrade to existing kit.

State-owned Télé Liban and private Al Mayadeen are both significant channels in the region. Télé Liban is one of the longest established TV stations in the Middle East whilst Al Mayadeen is a wide-ranging news channel, owning offices in Tunisia, Cairo and Tehran, and headquarters in Beirut.

Dany Akoury, technical manager at Télé Liban and project supervisor for the renovation, says: "The SPX Zoomspot luminaire's crisp white beam is one of its best features. It ensures high definition projection without pink hues, which can be easily detected by HD cameras. Its tilt lock and shutter clamp are also ideal for our studio setting as it allows the beam to be fixed and precise throughout broadcasts."

The Al Mayadeen studios are also benefitting from the power of the Selecon SPX Zoomspot, which is being used as a 'profile light' focusing on the anchor/host, guests and screens, and blends homogeneously with the adjacent PLfresnel1 luminaire's single source RGBW colour mixing beam. 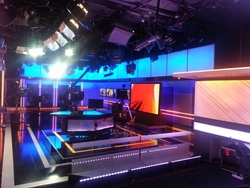 The Philips Selecon PLfresnel1 is perfect for studio lighting applications as it allows designers to easily create a multitude of different looks for shows without having to change lamps or colour filter. In addition, the luminaire's single source RGBW LED chip delivers limitless colour mixing capabilities and variable colour temperature.

"The PLfresnel1 LED luminaire's infinite colour-mixing feature is great," continues Farhat. "It's also a really practical unit which doesn't use up much-needed studio space as it mitigates the need for multiple luminaires. It's also really efficient which allows the station to cut down on expenses."

The lighting in the Al Mayadeen studio is controlled by the Strand Lighting 200 plus Lighting Control console, which is ideal for the studio environment as it features 12 easy-to-record effect playbacks with 48 steps each, and allows for easy lighting changes according to the change in segments and moods.

"The Strand Lighting 200 plus Lighting Control console is a fantastic addition to our studio, as it is particularly useful in live broadcasts where the lighting operator has to have an easy-to-access console with a variety of playbacks to coordinate the lighting on the spot," says Farhat.

"We chose Philips Strand Lighting and Philips Selecon products because of their reliability and proven track record," explains Télé Liban's Akoury. "The user-friendliness of the products also reinforced our choice as our technical staff are able to operate them without having to undergo extensive training."

Mirroring this sentiment, Farhat comments:  "Philips Selecon and Strand Lighting have long standing reputations, and we had the convenience of a reliable technical support team through Prolites. This was really reassuring for a new TV station."

About Philips Entertainment
Philips Entertainment Lighting accommodates a diverse range of entertainment applications including: stage and set lighting, film and broadcast lighting, and video-based effects and displays. It also supports architectural lighting of performance venues, whether to enhance theatre lobbies or to create a dynamic exterior effect to coincide with performances.With the acquisitions of Genlyte (including its Vari-Lite and Strand Lighting brands) and Selecon, Philips dramatically expanded its entertainment lighting portfolio from specialty lamps to the industry-leading luminaries and control systems that are prevalent in the field today. Collectively, the group provides wide-ranging products from simple lamps to complete solutions designed with the specific needs of the entertainment market in mind.