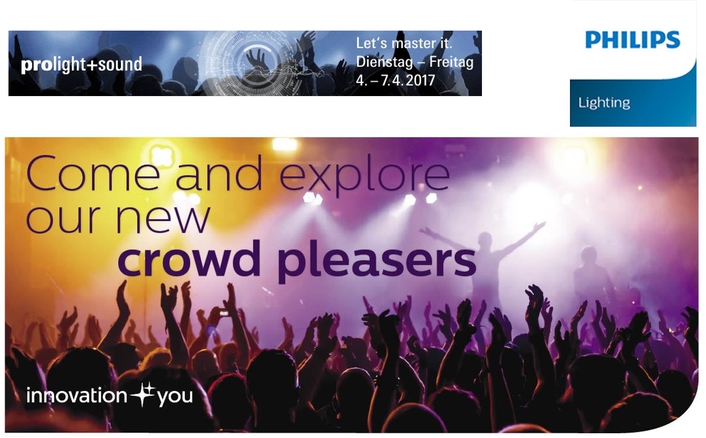 The new trailblazing products will be incorporated into the lighting design for the stand, which will transform into a stage for a performance from Dutch rock band TOM on Tuesday April 4 between 6pm and 10pm. The group sees a lineup of the original members of popular Dutch group The Marshalls, formed in 1995 (TOM stands for The Original Marshalls), who are well known on the European festival scene, in particular the infamous Zwartecross motorcross festival.

Also showcased on stand will be the new Philips Vari-Lite VL6000 Beam and Philips Showline SL LEDSPOT 300. Since its release in January, the Philips Vari-Lite VL6000 Beam has illuminated such high profile events as Lady Gaga's critically-acclaimed Super Bowl HalfTime Show performance and her collaboration with Metallica at The GRAMMY Awards. The Philips Showline SL LEDSPOT 300 has proved ideal for studio as well as stage lighting, providing dynamic effects on the current series of Channel 4's The Last Leg.

Alongside the 'television studio' there will be a 'control tower' area, displaying Philips Lighting's connected control systems and the latest version of its Vision.net lighting management platform. Offering unparalleled flexibility, Vision.net 4.5 is scalable from a single room to a large multi-building campus and is designed to integrate with all Philips Entertainment Lighting dimming systems, automated luminaires and LED fixtures across the product ranges.

Colin Kavanagh, General Manager of Philips Entertainment Lighting said: "With our product innovation we aim to inspire our end users and customers to create great experiences for audiences around the globe, whether they are watching live or at home. In today's world almost every event is broadcast, whether it be televised, live streamed or recorded and shared via smartphone. As a result there's an increasing need for entertainment technology which creates impact both live and through a lens - a demand we have responded to with our latest, broadcast-ready lighting products."

Prolight + Sound will take place April 4-7, 2017 at the Messe, Frankfurt, with Philips Entertainment Lighting on stand F25 in Hall 3.