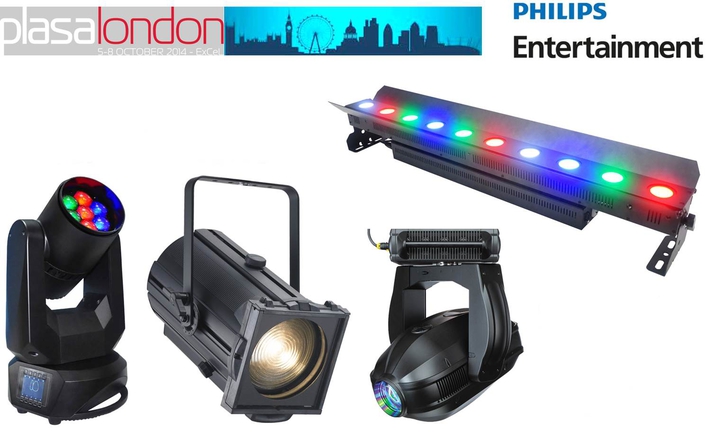 Philips Entertainment's premier product line Showline will be launching a plethora of cutting edge new LED luminaires
Philips Entertainment is set to have one of the biggest and most successful PLASA London shows to date, with the launch of brand new luminaires, exciting demos of the latest additions to its three premier brands, Selecon, Strand Lighting, and Vari-Lite along with its product range Showline, exclusive afternoon-tea-with-a-twist press event, party in a super special venue and celebrations for Strand Lighting's 100th anniversary.

Philips Entertainment will be found on stand L80 at the ExCeL exhibition centre, where members of the Philips team will be chatting to visitors and demo-ing the fantastic new products through interactive daily light shows.

The Philips Vari-Lite VL4000 Spot luminaire will be making its first major UK trade show debut. PLASA visitors will be able to get to grips with all its exciting features, including its high-resolution optics, entirely new colour mixing system and 5:1 zoom covering an amazing 9 to 47 degrees without sacrificing output or clarity.

Only a select few lighting designers have got their hands on the VL4000 Spot so far, with Michael Murnane in the US saying: "It's amazing the number of colour changes and gobo changes that the VL4000 Spot is capable of and it's all so fast. The speed of the head is a game-changer in my opinion. I actually think if I got to spend a week with the fixture I could get it to do a lot of things that people haven't even thought about yet."

Showline will be unveiling an array of cutting-edge new LED products, the SL BAR 510 and 510N, SL eSTRIP 10 and the SL BEAM 100, which all perform just like traditional luminaires but with the plethora of advantages LED offers.

The SL BEAM 100 delivers a bright homogenous beam with three independent zones of control, allowing users to create unique designs on the front of the luminaire and its seven RGBW 15-watt LEDs deliver over 1500 lumens of output and a crisp edged beam. In addition, as with every Showline luminaire, it utilises the Harmonize Color Calibration system. This revolutionary process ensures colour matching not only between luminaires but also between individual pixels.

Very special festivities will also be taking place to celebrate 100 years of Strand Lighting's innovation, including a cocktail hour at Strand Lighting bar on the Philips Entertainment stand, which will be beautifully lit by vintage Strand Lighting kit.

All are welcome to enjoy exclusive celebratory cocktails and nibbles every day at 5pm, alongside some very special VIP guests. So make sure to join in raising a glass or two to a century of lighting innovation!

In the run up to the show, why not share some photos, stories or memories you may have of Philips Strand Lighting on the 100 years of Strand Lighting Facebook event, which can be found at: https://www.facebook.com/events/765078330200078/

Other exclusive Philips Entertainment events will be happening over the four days, including afternoon tea with a twist (think long island ice tea served from pretty tea pots!) for the press on the Sunday at 3pm, and the much-anticipated Philips party in a soon-to-be-disclosed mystery location on the Tuesday night.

PLASA London takes place between the 5 and 8 of October at the ExCeL exhibition centre, with Philips Entertainment on stand L80.

About Philips Entertainment
Philips Entertainment Lighting accommodates a diverse range of entertainment applications including: stage and set lighting, film and broadcast lighting, and video-based effects and displays. It also supports architectural lighting of performance venues, whether to enhance theatre lobbies or to create a dynamic exterior effect to coincide with performances.
With the acquisitions of Genlyte (including its Vari-Lite and Strand Lighting brands) and Selecon, Philips dramatically expanded its entertainment lighting portfolio from specialty lamps to the industry-leading luminaries and control systems that are prevalent in the field today. Collectively, the group provides wide-ranging products from simple lamps to complete solutions designed with the specific needs of the entertainment market in mind.