Strand Lighting launched 'a new chapter in the evolution of control' in its 100th year in the form of the brand new NEO
Following the incredibly positive reactions to new product launches from all four of its premier brands - Selecon, Showline, Strand Lighting, and Vari-Lite - Philips Entertainment is celebrating its most successful Prolight + Sound to date.

Philips Vari-Lite's eagerly anticipated feature rich VL4000 Spot luminaire made its global debut, showing off its high lumen output, precision optics, and full feature set. Attendees of the show were impressed with all the abilities packed into the cost effective luminaire.

"The VL4000 Spot represents the first in a new generation of Vari-Lite luminaires designed to provide designers, rental companies, venues and productions with luminaires offering unlimited possibilities without compromises," said Brad Schiller, Vari-Lite Product Segment Manager. "The launch at Prolight + Sound with multiple light shows and continuous amazing looks showed the industry many of the capabilities that make the VL4000 Spot the new choice luminaire for productions and rental companies around the world." 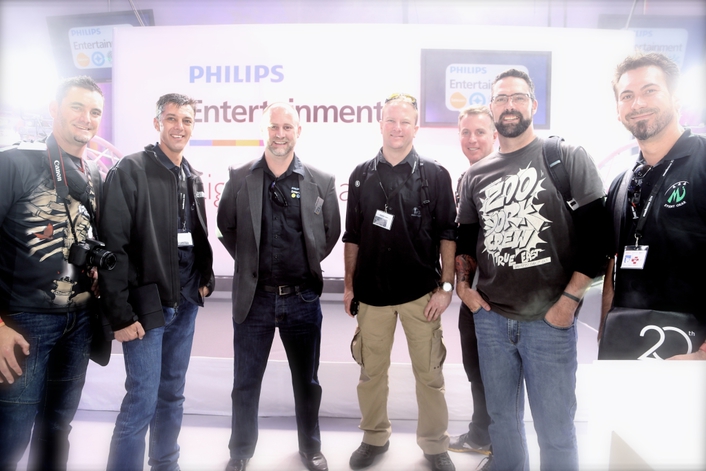 Strand Lighting launched 'a new chapter in the evolution of control' in its 100th year in the form of the brand new NEO expandable control system. The sleek and modern NEO is designed to make a strong statement of Strand Lighting's commitment to creating forward-thinking, powerful consoles catering for the needs of the most demanding lighting design projects.

"Interest in the Strand Lighting NEO control was immediate and constant throughout Prolight + Sound, demoing the NEO's ability to seize the light, to grab, move, change, position, colour and motivate your lighting design simply and effectively," says Pete Borchetta, Philips Entertainment Product Marketing Manager. "NEO is the closest that a designer can get to actually touching the light, and heralds a new era for Strand Lighting as the company celebrates its 100th anniversary of lighting control. At Frankfurt, we witnessed is the future of Philips Strand Lighting - 2014 is going to be a great year for the brand as we roll out NEO worldwide."

Richard Schmit, GM PLS Entertainment Group at Philips, concludes: "We are incredibly proud of our new range of luminaires and control systems from all four of our premier brands. There is definitely a real sense of excitement in the industry following their unveiling at Frankfurt. The stature and size of our presence at Prolight + Sound, and the fact that we had two important global premiere product launches there, demonstrates our commitment to the European market and our ambition to thrive as a leading player in the European Entertainment market. We will continue to serve our markets with the fast delivery of meaningful technological innovations in every new product that we launch."

About Philips Entertainment
Philips Entertainment Lighting accommodates a diverse range of entertainment applications including: stage and set lighting, film and broadcast lighting, and video-based effects and displays. It also supports architectural lighting of performance venues, whether to enhance theatre lobbies or to create a dynamic exterior effect to coincide with performances.
With the acquisitions of Genlyte (including its Vari-Lite and Strand Lighting brands) and Selecon, Philips dramatically expanded its entertainment lighting portfolio from specialty lamps to the industry-leading luminaries and control systems that are prevalent in the field today. Collectively, the group provides wide-ranging products from simple lamps to complete solutions designed with the specific needs of the entertainment market in mind.