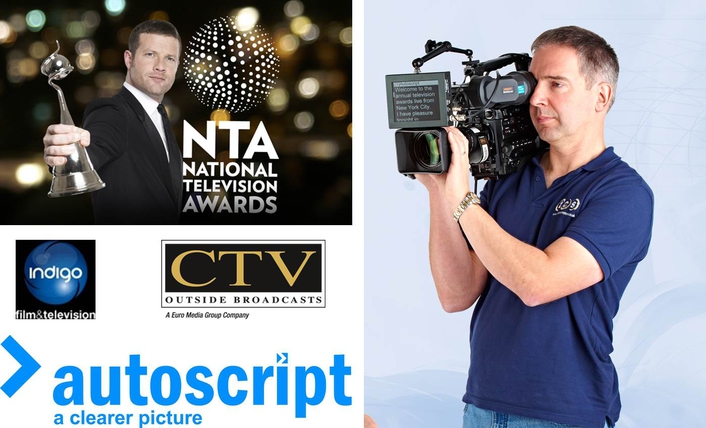 .
Autoscript Rentals, part of Vitec Videocom, a Vitec Group company, provided its prompting solutions to the Outside Broadcast specialists, CTV, to prompt the presenters of this year’s star studded National TV Awards at London’s O2 Arena.

CTV, one of the largest and most well-respected OB Companies in Europe, hired two Autoscript Miniscript 5.6” handheld monitors and the renowned WinPlus system complete with a live switcher installed between them to provide back up in the event of any technical difficulties. CTV also hired one of Autoscript’s experienced operators to run the prompting equipment at the Indigo Television production of the 20th National TV Awards ceremony.

The OB company has covered some of the UK’s biggest live televised events from X Factor Finals, to BBC Sports Personality of the Year and the Strictly Come Dancing live shows in Blackpool.

The equipment selected from Autoscript Rentals that was in action at the event included two Miniscript 5.6” monitors and the WinPlus software operating system, complete with a live switch.

The prompting solution was used to support the show’s main presenter, Dermot O’Leary, during the 150 minute live broadcast.

Rob Harwood, Head of Rentals, Autoscript said: “This spectacular show is Britain’s biggest TV awards event and we are thrilled that our equipment was selected to help prompt Dermot during his live delivery. Autoscript solutions are the prompting equipment of choice at the nation’s most popular entertainment shows. Last month we marked a decade of providing our solutions and operator to support the X Factor Live Shows and our kit has been used at the NTAs for several years running.

”We would like to congratulate all of the worthy winners of the awards, and to the presenters and production team for creating yet another winning performance.”

About Autoscript
Autoscript is the world leader in the prompting industry, providing professional teleprompting equipment to broadcasters across the globe. Established in the UK in 1984, with headquarters in the UK and the US, Autoscript designs and builds innovative hardware and software to meet real world needs and continually enhance the production process. A prime example of this is Autoscript’s latest product, the E.P.I.C. (Enhanced Prompting Information Centre), an all-in-one prompter display and on-air talent monitor that vastly simplifies studio equipment, reduces power consumption and enables easier location prompting. Autoscript is a member of the Vitec Group.