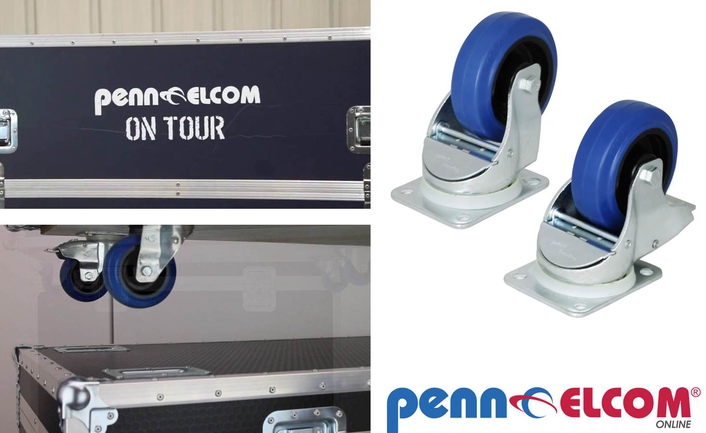 Penn Elcom Online launches a truly revolutionary new product – Automatic Castors – a neat and ingenious product … for which the flight case making sector has been waiting for years!

This is also a game changer for the brand that is renowned worldwide in the entertainment, leisure and production industry, for its flightcase components, and is available via Penn Elcom’s global online sales portal which went live earlier in the year and is proving a huge success.

Anyone using a flightcase will appreciate the benefit of Automatic Castors.

The product utilizes a unique self-centring mechanism, developed by Penn’s R’n’D team, that stops the caster spinning and clicks it into the straight position when it’s being lifted or not bearing any load!

This simple and ingenious device will make stacking case systems and loading trucks at a show or concert faster, easier and much safer than ever before.

The sheer frustration of picking up the case and assuming awkward positions or trying to wiggle potentially heavy loads to align the wheels properly in the right orientation for stacking … is over!

The castors simply do it themselves.

Penn Elcom has been selling its robust and rugged ‘industry standard’ castors for many years, and the Automatic platform moves flightcases into a different league.

Automatic Castors are straightforward to retro-fi on any standard castor wheelbase for additional flexibility.

“We had an instant response and have experienced massive interest,” stated Pen Elcom Online’s Rob Platt. “It’s one of the simplest but most innovative products Penn Elcom has ever developed and brought to the market and it’s well priced, so we are expecting it to be a best seller!” he concluded.