“For this project, the client required a complex video server solution to map the video content onto the required spaces. We ensured that multiple video and audio files were played back in sync and on cue during production,” explains Malcolm Finlay, Managing Director at PENMAC Audio Visual.

Sound designer Murray Lubbe required the flexibility of having 16 high quality audio playback tracks available to support the visuals during the two-hour broadcast production and that could be used for live band performances at the show. PENMAC Audio Visual integrated Dataton WATCHOUT with the Ovation media server and sequencer from Merging Technologies to ensure that multiple tracks played back in frame-accurate sync to the visual content.

“Once the server IP addressing in Merging Technologies’ Ovation is set, it really is as simple as naming your audio track grouped file with the same name as your Auxiliary timeline in WATCHOUT. Just play the visuals, and the audio follows – job done!” 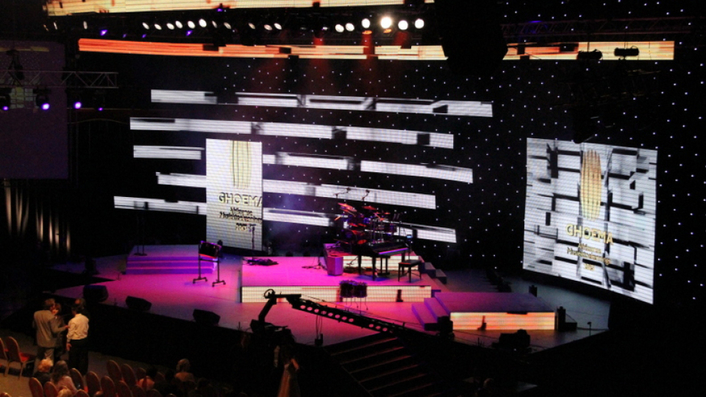 Fredrik Svahnberg, Marketing Director at Dataton says: “We’re delighted that WATCHOUT was used throughout the awards ceremony by PENMAC Audio Visual. Its open platform and ability to work well with software such as Ovation is testament to its integration flexibility and suitability for large-scale events.”

The Ghomea is an accolade by the Ghoema Trust to recognize outstanding music in the Afrikaans music industry. The 2013 event was held at Carnival City Big Top Arena on 14 April 2013 and sponsored by Kyknet and Rapport under the direction of Barry Pretorious from the Ghoema Music Trust. The TV director involved in the event was Andre Calitz from Blixem Productions.

South African Music Awards are in Sync
Kraftwerk Relies on WATCH...3D and Live Interactivity
Only CBS – only with Dataton WATCHOUT