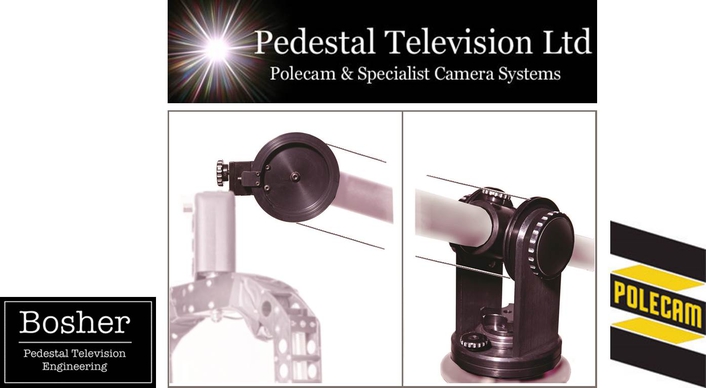 The Polecam pan & tilt head is re-attached to the front of the rig by a bespoke quick release clamp and is levelled by a simple cable. This maintains a level horizon during even the quickest moves, and enhances stability in windy conditions and also when using the Polecam head underwater via the FishFace system.

Top Polecam owner operator John Gillan said “I’ve just come back from the Bahamas where I was shooting a Red Bull Ultimate Rush documentary with my Polecam. I knew that I would be set up on a cliff top with a likelihood of strong winds, always a problem for any jib or crane, so I ordered a Bosher Head system from Chris and took it with me to help stabilize the Polecam in what could be a very difficult situation.

In the event there were indeed strong winds, and I’m happy to say that the system worked perfectly. It did exactly what I hoped it would do, and I certainly wouldn’t have been able to shoot it so successfully without it.”

“The Bosher Head system will now become part of my Polecam kit, and I have the confidence to know that I can shoot outdoors in difficult windy locations and produce stable results. Polecam is already an amazing production tool and this enhances its capabilities even further.”
John Gillan is one of the world’s top Polecam owner operators, based in the UK but working world wide.

The Bosher Levelling Head system is retro compatible with all existing Polecam heads including the FishFace underwater system. It is now available directly from Pedestal Television www.pedestaltv.com, along with other fine engineering products from lens mount adapters to complete design and fabrication projects.

Les Bosher is a veteran of the golden age of cinema, including his camera engineering work on six of the Bond films and also ‘Raise the Titanic.’ A camera engineer and designer for 47 years, Les remains at the forefront of bespoke camera modifications and quality engineering. Chris Bosher has more than 20 years similar engineering experience, creating anything from custom filter holders to complete camera crane systems. Their combined skills offer a very high level of engineering expertise as seen in the Bosher products.

Pedestal Television is the company founded by Chris Taber, Polecam owner operator based in Mid Wales, UK. Already an experienced cameraman, he bought his first Polecam in 2008 and quickly found that it was an outstanding creative tool that he could use to extend his career further. Since then he has worked exclusively with Polecam and has become one of the most sought after operators. He has standardised on using the Canon C300 camera on his rigs, which is producing outstanding picture quality for his clients, who frequently use the C300 'Off Pole' to complement or even to double up as the main unit.