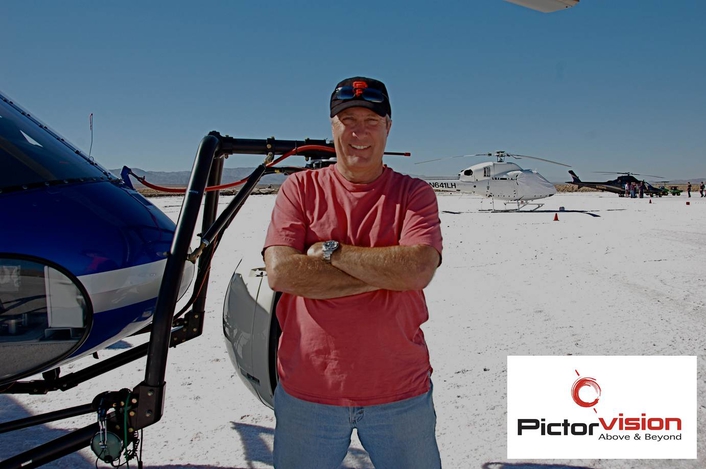 .
Aerial cinematographer Phil Pastuhov is one of the busiest shooters in the business. He’s always charged with interesting jobs – and usually halfway around the world. It is, after all, a global production community these days. And, wherever he goes – it’s usually Pictorvision’s Eclipse aerial camera stabilizing system that takes him through the challenges with ease.

“One of my most interesting jobs this year was a final shot for a major feature shot in the Philippines,” Pastuhov says. “You can’t tell it is an aerial until we pull away. At the start, you think it’s a dolly shot, then maybe a crane, then you realize it is a full blown aerial. It’s an incredibly nuanced shot. The most critical part was getting the boat heading in the exact direction we needed so that the wind blew the helicopter downwash out of the shot. Once we had the boat sorted out, the Eclipse allowed us to do this with absolute stability and incredible subtlety. It really sold the sequence with its rock solid performance. Both the director and first unit DP came up to me later and praised the shot.”

Another challenge took place on location here in the United States. The big thing was capturing plates in both IMAX and with the Sony F-65. “The open architecture of the Eclipse really helped me here,” says Pastuhov. “It was the only system that could support our needs. We only had a couple of days to get the footage so the change over from IMAX to the F-65 had to be quick and I needed to know positively that each camera system and my lens options would not be limited by the aerial mount.

We ended up making the change over more than once and each time it was quick and went without a hitch. We had a big zoom and primes on the F-65 and used primes for the IMAX shots. I was very happy that the F-65 worked with the Eclipse, with a full array of lenses, and that the time spent changing lenses did not endanger our shooting time.”

Pastuhov also had a challenging ARRI Alexa shot with an Optimo 12-1 lens. “It seems like this is becoming the standard on a lot of shoots,” he says. “This set up gives reliable performance and the maximum flexibility of Eclipse’s open architecture can handle anything.

“Three films, four different cameras, multiple lenses – so many options in camera – all easily handled by Eclipse. It simply allows me to give production a variety of options for the best way to accomplish the director’s vision.”

It isn’t just the equipment that keeps Pastuhov coming back to Eclipse. It’s also the people. “It’s their ‘can do’ attitude,” he says. “If they don’t know what to do to help us, they will find out. If they haven’t tried a system combination, they’ll check it out and make sure it is 100% right before it leaves the shop. They are very conscious and committed to getting and keeping your business.”

In the past several years aerial DP Phil Pastuhov has shot aerials for Bourne Legacy, This Means War, Extremely Loud and Incredibly Close and the upcoming films The Internship, Star Trek into Darkness, GI Joe Retaliation and Jobs.