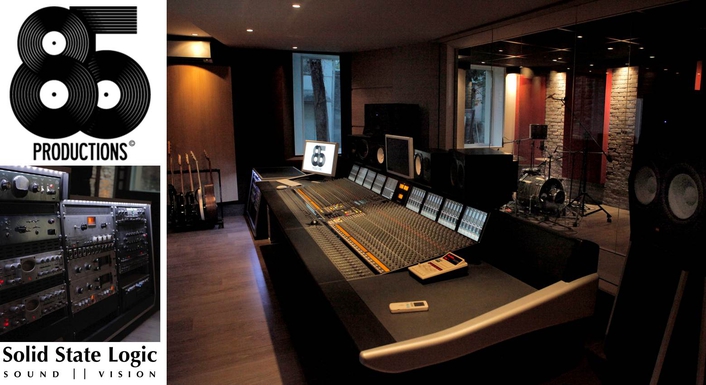 Studio 85 officially opened in September. The facility was created in the backyard of a building in the 15th Arrondissement by Guillaume André, who previously created and ran Loko Studio in Normandy, and Renaud Rebillaud, a freelance sound engineer and composer.

André and Rebillaud both work as engineer/producers and have a number of high profile television, radio and music clients. Recent work includes television ads for Loréal, Canal Satellite, Disney Channel and ING, radio ads for France Galop and Cash Converters as well as music projects for French recording artists such as Sexion d’Assaut, My Pollux and Amen Birdmen.

When building Studio 85, André drew on his experience of building Loko Studio, a residential facility that featured an SSL 4000 series console.  The new Duality at Studio 85 presides over a spacious 55sqm control room, a 40sqm ‘L’ shaped studio room overlooking an outdoor garden and a 10sqm isolation room – all with natural light.

Guillaume André, manager/partner of Studio 85 and 85 Productions, says: “We created Studio 85 in response to the production needs of our clients, both from a technology and personal point of view, putting emphasis on the comfort of clients and artists and on the creative process. We are constantly working with outside engineers, so providing a console that offers an industry standard interface, combined with intuitive DAW control was essential. The 48-channel Duality SE fit the bill on every level, including 5.1 surround mixing options.”

Renaud Rebillaud, manager/partner of Studio 85, adds: “Because of our high-profile clients, our acoustics needed to be perfect to derive the full sonic benefits of the Duality. We have put together a wealth of high-end outboard mic pres, compressors and equalizers and the Duality really helps to bring all these elements together for capture to our Pro Tools® system. We were not used to working with a console with DAW control built in, so Duality was a nice surprise because it was simple, fast and logical to use.”

“The other side of our business deals with our own creative energy,” states André. “Both Renaud and I have worked in cramped home-type studios with less than perfect equipment and that experience dictated that Studio 85 be the very best on every level. We wanted the studio to be spacious and welcoming because as soon as an artist or producer is at ease in a studio, great work follows. By extension, Studio 85 is the perfect space for our own creative vision. The mission for the Duality is to capture every nuance of every inspired performance – and it accomplishes that mission.”