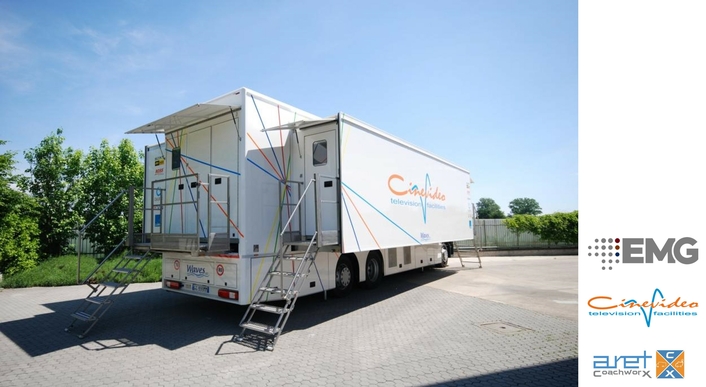 Everyone knows what living a pandemic means, personally but also professionally speaking. They have been, and they still are, hard times for business and production in many sectors, but there are companies that are going all out to face and win these uphill periods.

ARET video and audio engineering, together with its coachbuilding facility, ARET Coachworx, have been able to capitalize on years of experience and trust of their customers and they launched two projects that are extremely relevant to them of course, but also in the whole OB Van market, because of their peculiarities. 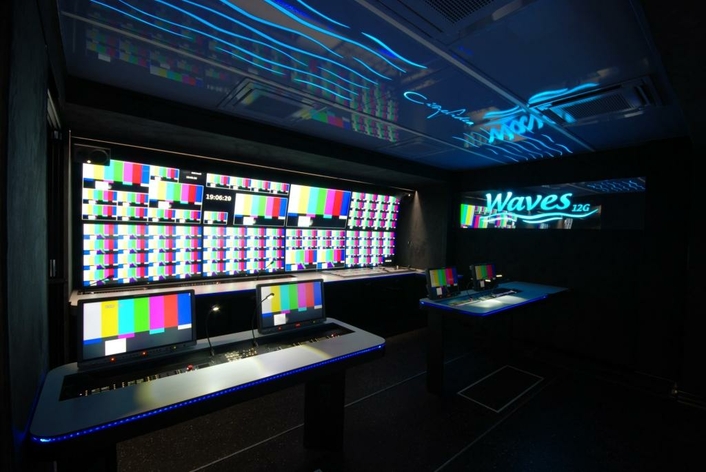 The first one is the OB Truck realised for Cinevideo: Waves 12G, a fully customed truck that offers the same space as a trailer.
Waves is a 20 cameras UHD HDR 12G SDI technology, 14-metre, three-axle truck equipped with double expansions.

The challenges of this projects were a lot, but ARET’s engineers faced them with great professionality, working on every detail with millimetric precision. Cinevideo asked for a truck that granted to maximize workflow redundancy, minimize time to operation, keeping the broadcast operations easy and that was recognizable, thanks to very precise aesthetical details. Moreover, they needed a truck allowing the same production space as a trailer. Amplitude, especially during pandemic, plays a key role, also to guarantee safety for all the people who work onboard and both ARET and Cinevideo paid great attention to this kind of aspects. This is the same reason why they chose to install a fully redundant AC system with treated air exchanged from outside. 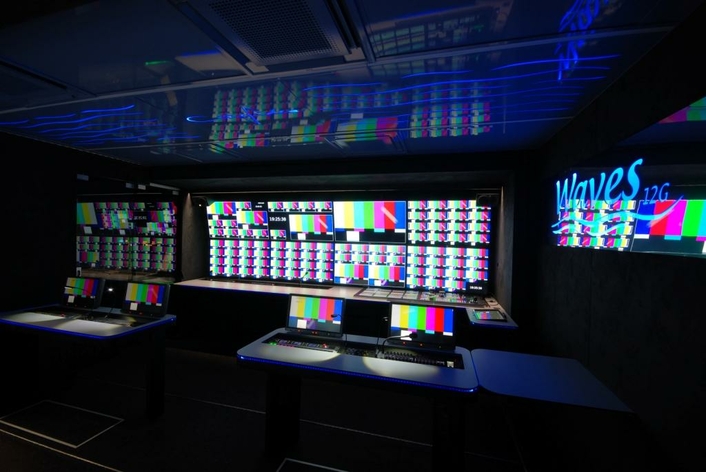 In the end, ARET Coachworx and ARET video and audio engineering realised the most comfortable and powerful UHD HDR workflow large OB Van currently on the market.
The second project ARET is extremely proud of is Nova 106 commissioned by EMG – Euro Media Group.

For this innovative 14-metre OB Trailer, ARET conceived the “box-over-box” expansion all along the left side of the vehicle, 2 metre width, a so smart but also so sophisticated way of expansion, that raises the inside space work considerably. ARET’s teams of engineers, coachbuilders and cablers studied and engineered everything to the millimetre, detail by detail, leaving nothing to chance. 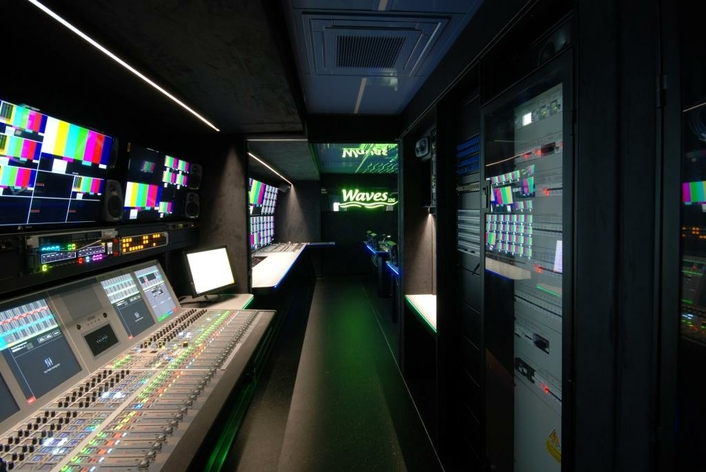 Another important peculiarity of this trailer is the fact that all the rack frames can be unloaded, as they are mounted on guides that allow them to be taken off through a hydraulically actuated tailgate.

On the right side of the vehicle there are two entrance platforms to access the four different internal work areas: sound room, production A (main direction), production B (secondary direction) and shading (technical room/video control area). On the rear part of the shading there is an equipment room, separated from all the other zones by acoustic insulating doors and a dedicated AC system. 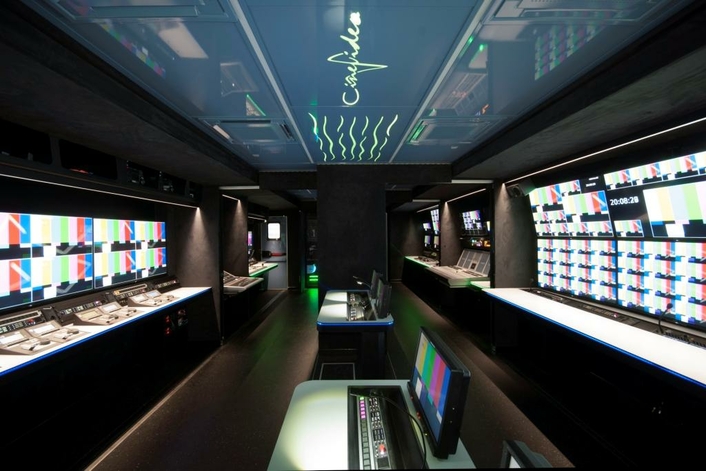 Ceiling and floor heating and fully redundant AC system with treated air exchanged from outside allow the best working conditions during long productions, together with monitor wall and production A main desk electronically activated to adjust their position.

This up to 24 UHD cameras trailer is IP-based, and all the rack frames and desks are fiber-connected. 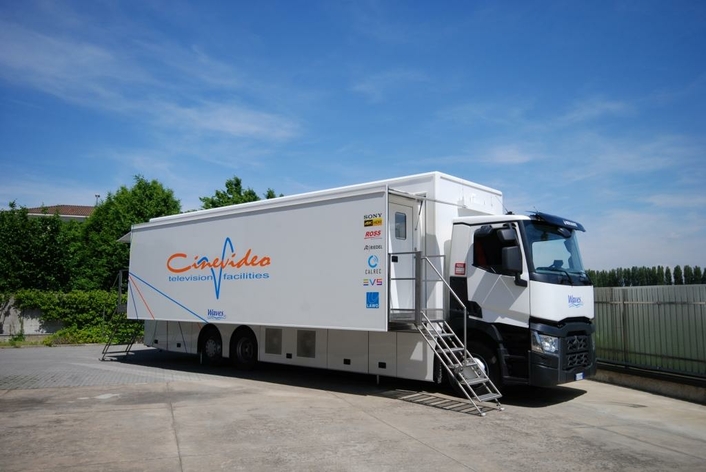 The cutting-edge technology on board guarantees the highest quality of the production in the less time possible, and the high level of the engineering provided backup systems for every production area and for all the mechanical aspects of the trailer.

These two projects are the demonstration that know-how, determination, and passion are the only values that allow you keep going on, even in hard times, even if everything around seems to want to stop. 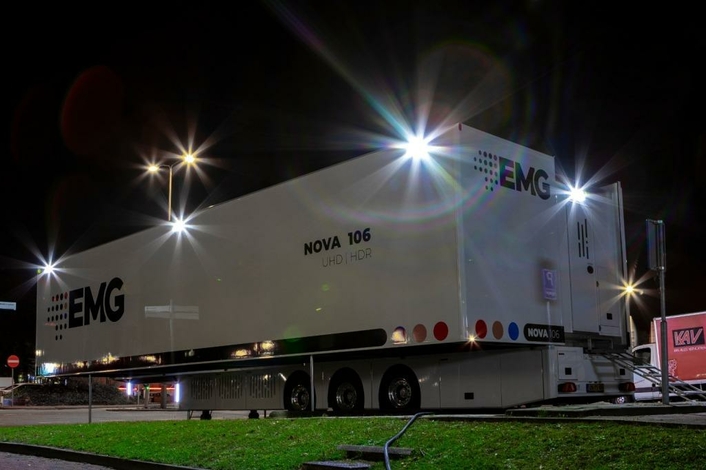 About ARET Coachworx: The job starts from consultancy, structural design, electrical engineering, air-conditioning, system design and proceeds throughout all the phases from coachbuilding to systems integration, commissioning, training and after sales support.

About Cinevideo: founded in 1983, it is a dynamic company that offers its technical and creative skills at the service of television production, currently covering the most important national and international television events for major tv broadcasters.

About EMG: for over 35 years EMG has been facilitating the largest international events and greatest sporting moments from around the world. Its teams of experts strive to capture those raw emotions and experiences at each event and deliver lasting content to world-wide audiences.