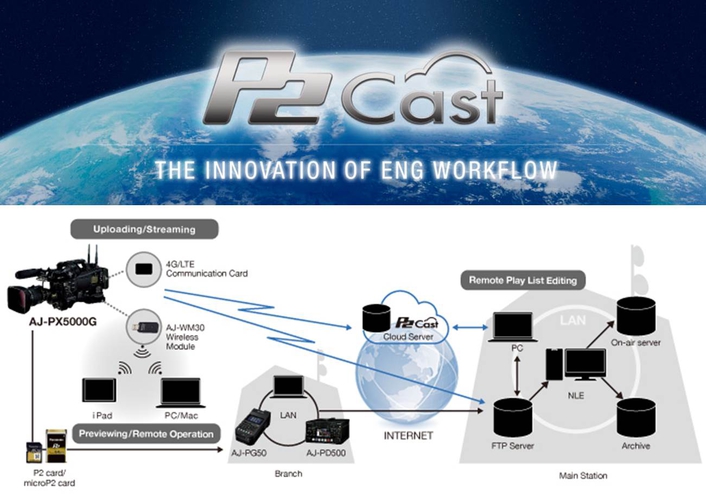 Panasonic has announced a series of upgrades to its P2 Cast cloud-based news production system, launched earlier this year at NAB in Las Vegas.

P2 Cast leverages the network features of the company’s next-generation P2 HD camcorders, so that content uploaded to the cloud is immediately available for reviewing and editing.

It dramatically expedites the delivery of news to air, while at the same time expanding the editing function to many internet connected devices. A major advantage is its ability, via the cloud, to move low bit rate, yet high-quality proxy video off a camcorder in the field and create a video sequence of the desired clips. This allows the newsroom systems to automatically pull back high-resolution video for air from the camera.

The September upgrade makes available the following new features:
1. Direct transfer of high-quality footage to a designated FTP server. Users can select between a customer FTP server or the cloud server in the P2 Cast system.

2. Story-ID import from Avid iNews (as a beta function). P2 Cast can extract key news story information from Avid iNews. The P2 metadata with an essence from the news story can then be recorded in P2 camcorders.

In addition, the AJ-PG50 memory card recorder will have the P2 Cast network features with its firmware update, set for the end of 2015.

P2 Cast is free of charge to new users, for the first three months. For further information on P2 Cast, contact your local sales representatives, or by visit: http://business.panasonic.co.uk/professional-camera/p2-cast.