The P2 recording media and accompanying hardware were introduced in 2003 and provided a substantial improvement in workflow by being file-based with computer editing; a significant reduction in maintenance and operating costs by eliminating mechanical transports from cameras and recorders; and an overall higher reliability. Subsequently, Panasonic has driven the proliferation of solid-state video acquisition with worldwide sales of P2-based products surpassing 220,000 units.

With the industry’s first solid-state, no-moving-parts design, P2 products have dramatically reduced the downtime associated with mechanical issues. P2 products are better able to perform in extreme environments and are resistant to temperature extremes, shock and vibration, unlike mechanical tape, hard disk, and optical disc systems. Reducing the ongoing cost of acquisition, P2 cards can be used reliably again and again, without deterioration in quality. 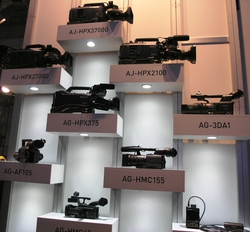 Advances in P2 technology have included memory cards growing from 2GB to 64GB while declining in price and attaining transfer rates up to 1.2 Gbps, as well as the introduction of increasingly powerful codecs such as the master-quality 10-bit 4.2.2 AVC-Intra codec, and, most recently, AVC-Ultra, a new compression platform with the capability of delivering 4K 4:4:4 quality, while also offering lower bit rates to handle mainstream professional video applications.

Launched in 1948, the Technology and Engineering Emmy Awards honor development and innovation in broadcast technology and recognize companies, organizations and individuals for breakthroughs in technology that have a significant effect on television engineering. Panasonic has won a total of 16 Emmys, 12 of them for advancements in the area of digital video technology. 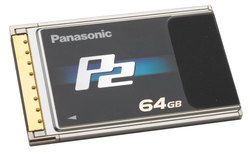 About P2 Media
P2 cards record the same way that digital still cameras record onto memory cards: they store the footage as computer files. Instead of recording the video as “video data,” they record the footage as computer data files. These files are instantly editable and can be transferred to other computer storage media directly, without the restrictions of needing proprietary video decks or having to wait for real-time transfers. In fact, footage can be edited directly from a P2 card, without having to transfer to a computer at all. Because P2 cards record in universally interchangeable MXF data files, they are immediately usable by properly configured Windows and Macintosh computers. The P2 cards eliminate the need for VTRs, eliminate the need for proprietary video hardware to read or transfer their contents, and eliminate the need to “capture” or “digitize” footage.