The Padcaster Is Now Available

Begin shooting, editing and sharing high-quality footage straight from the iPad
The Padcaster LLC has announced its namesake product, The Padcaster, and accompanying Lenscaster add-on are officially shipping. Designed for video journalists, videographers, DSLR shooters and more, the brand new Padcaster transforms an iPad into an on-the-go production studio, providing an easy and professional way for users to create stunning videos on the iPad, from storyboarding and shooting to editing and sharing. Since it was introduced to the film and production world at NAB 2012 in Las Vegas this past April, The Padcaster has already received rave reviews.

“I had an opportunity to test a pre-production version of the Padcaster / Lenscaster combo, and I have to say that I'm impressed,” said Steven Sande of The Unofficial Apple Weblog (TUAW). After a thorough review, he concluded, “Anyone who is interested in using an iPad for filmmaking or broadcasting – either as an amateur or professionally – should consider getting the Padcaster. It's a brilliantly conceived and well-built accessory that should be extremely popular with the video and filmmaking crowd.”

Perfect for professional and amateur videographers alike, the Padcaster is an aluminum frame with a urethane insert that snugly holds your iPad for a secure and solid feel. Threaded holes lining the edges of the frame allow filmmakers to attach external mics, lights and countless other accessories to enhance their finished product. A standard ¼-20 screw thread and locking-pin design centered on the bottom of the Padcaster lets users connect it to a professional tripod, monopod or shoulder mount for easy, smooth filming.

“We’ve gotten a lot of great feedback from the community since The Padcaster made its debut at NAB,” comments Josh Apter, founder and president, The Padcaster, LLC. “We’re very excited to get The Padcaster in the hands of filmmakers and creatives who are passionate about exploring new media for producing film, not only to hear what they think of the finished product, but also to see what they’re able to create with the help of The Padcaster.”

The Padcaster’s aluminum frame can also be used as a standalone DSLR cage. Filmmakers can rig a DSLR or other video camera into the cage, enabling them to attach numerous accessories to enhance their shoot. In the future, Apter plans to design urethane inserts to fit other popular tablets and iOS devices, like an iPhone or Android. 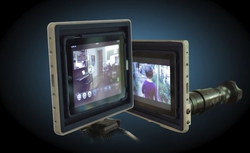 Unlimited Possibilities with The PadcasterAs the iPad increasingly makes its way into the world of production and post, the Padcaster serves as the perfect gadget to transform it not just into a mobile production studio, but also into the perfect in-studio or on-location assistant. In addition to an iPad case and mount, The Padcaster can also serve as:
·    On-set monitor
·    Teleprompter
·    Film slate
·    Portable light source
With its versatile frame, add-on capabilities and ability to house the world’s most advanced tablet, the possibilities are virtually endless when The Padcaster is in the hands and imaginations of industry creatives.

Padcaster Accessories – The Lenscaster
For videographers looking for more advanced filming options than what the new iPad or iPad 2 cameras offer, Apter created the Lenscaster – a separate accessory that attaches to the Padcaster and allows users to shoot footage on the iPad with a more powerful lens. Additional lenses can be attached via the Lenscaster to create a wider field of view or bring telephoto capabilities to the iPad’s fixed lens. And coupled with a 35MM lens adapter (not included), shooters can use cinema lenses to add shallow depth of field and better focusing for a DSLR-like feel.

The total Padcaster package transforms the iPad from consumer device to content creator with the ability to produce film-quality footage as an all-in-one production studio on the go.

About The Padcaster, LLC
Headquartered in New York’s Union Square, The Padcaster LLC is an innovative startup aimed at developing tools for filmmakers and videographers of all stages of development and skill levels. Established in 2012, its flagship title product, the Padcaster, is a multifunctional iPad case that takes users from passive consumer to creative filmmaker. The Padcaster was made by and for videographers to fit the needs of just about any filmmaker working with the ever-expanding set of production tools and technology.