Global Broadcast Service Provider to Build a New, State-of-the-Art 3G Facility
Pacific Television Center (PacTV), a Los Angeles-based independent global transmission and production company, is proud to announce that its London facility is moving to a new, larger building situated in the heart of London’s up-and-coming Tech City in EC1, also known as the Silicon Roundabout. Located near Farringdon Station and the new City Cross Rail, the broadcast services provider is commencing construction this spring, with plans to open the new facility in June 2015.

PacTV London’s new home will be twice as large and fully 3G capable, enabling the company to provide clients with enhanced services and amenities. There are plans for two HD studios, 20 racks of collocation space, a UPS backup and on-site generator, as well as eight fixed and steerable satellite dishes.

“PacTV London was opened 10 years ago and since then, technology has changed and we have grown considerably,” says Paul Abbott, Manager, PacTV London. “We have supported our clients through the global transition to HD video and digital audio, as well as the emergence of MPEG-4 and JPEG2000 transmission paths. Based on our experiences navigating these technological advances, we have doubled the backbone of our operation in PacTV Los Angeles and New York, and now, here as well in London, doubling our router capacity, all to meet and exceed the expectations of our clients well into the future. We are adding services and clients all the time. It is clear that our capabilities will just continue to grow.”

“Currently we have the ability to monitor up to 96 windows on three screens. With the expansion we will be able to increase that to as many as 480 windows on 15 monitors,” says James Lewis, Branch Broadcast Technician, PacTV London. “The current installation has enabled London operators to view sources from around the world. A need that was evident as the team works daily with such global broadcasters as BSkyB, Network Ten Australia, and Al Jazeera, providing them with transmission support to ensure content reaches viewers consistently and on time.” 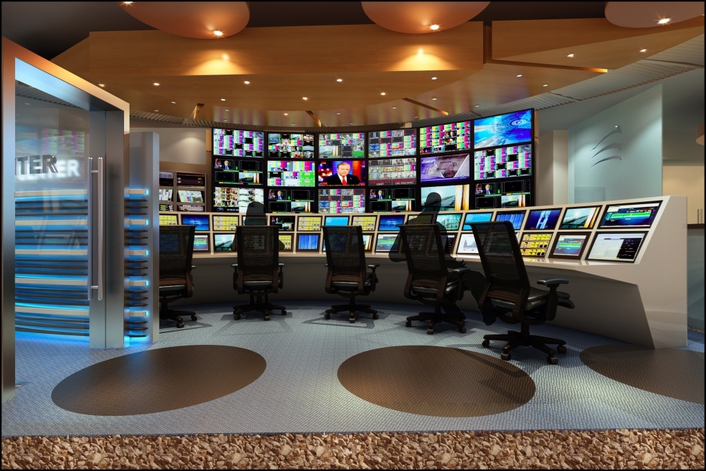 Rendering of the new PacTV MCR

It is this rapid pace of growth that Abbott cites as the primary reason for moving from PacTV London’s current 1,800 square foot facility to the new 4,000 square foot space in the heart of Clerkenwell. “This move gives us the opportunity to build something special that sets us apart from the rest of our industry counterparts,” he says. “Having Los Angeles-based architect Robert Ward leading the project’s concept and design, we are bringing a flavor of the west coast to London.”

“With the design of the new PacTV facility in London, we were focused on the company’s brand continuity while embracing the technological trends of the ever changing broadcast world,” says, Robert Ward, Architect, Robert Ward & Associates. “Our top two priorities are to build upon the fresh look and feel of Los Angeles, while ensuring that the London facility represents the cutting-edge of broadcast technology with its HD studios, master control room and services for accommodating its clients.”

Rounding out the project’s team will be JM Architects, designing the new dish farm, Absolute CAD as integrator, Total Studio Design for acoustics, and Stabb, Ltd., taking on the role of general builder and interior architects.

ABOUT PACIFIC TELEVISION CENTER
For more than 30 years, Los Angeles-based Pacific Television Center has been a leading transmission and live production provider to the global broadcast industry, offering its clients around-the-clock support and services in fiber connectivity, satellite coordination, receive and records, multi-format tape playouts, live shots, satellite media tours and voiceovers. On a local level, its broadcast facility in Los Angeles connects to the ATT Hollywood Hub and The Switch Los Angeles; in New York, it connects to Encompass/Waterfront, The Switch New York and Azzurro; and in London, its facility has multiple circuits to and from The BT Tower.
Additional services include the PacTV Pool in Los Angeles, remote production via PacTV's ENG truck, and a fiber network to several countries including the UK, Australia, New Zealand, Singapore, Canada and France. The company’s solid reputation has led to successful relationships with major networks including ABC, CBS, NBC, FOX, ESPN, CNN, BSkyB and BBC in the UK, Network TEN in Australia and Sky in New Zealand as well as top carriers including AboveNet/Zayo, SingTel, Intelsat, SES World Skies, British Telecom, Colt, Nexion and Level 3.