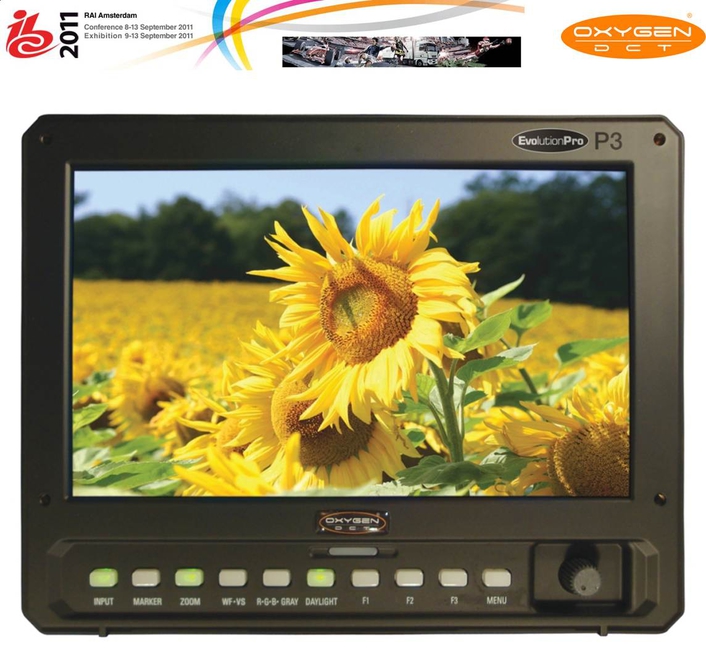 Oxygen DCT Takes Production Monitoring To The Next Level With The Launch of the Evolution P3 Series
Oxygen DCT is consolidating its position as a major supplier of monitors to UK’s top production companies and rental houses by launching the Evolution P3 series - a powerful new range of monitors that set the standard in terms of 'next generation' features, functions and picture quality.

The monitors, which will be on show at Oxygen DCT’s IBC 2011 stand (10.B44) boast a unique onboard HD recorder, as well as a host of useful camera set-up facilities. They have already been acquired by renowned Pinewood Studios-based Movietech, which has become the first rental house to adopt the Evolution P3 Series in the UK.

Steve Hathaway, Managing Director of Oxygen DCT, says: “For many years film productions have employed a second camera that tracks the main camera to give directors a fast video playback without interrupting the main camera recording. This video assist facility has been a vital part of the production process and required an additional video recorder and ancillary equipment. However, with the Evolution P3 Series, the director’s monitor has on-board recording from the main camera and instant on-screen playback. What's more, using optional SD-HC media cards, the video recording can be reviewed and stored on a laptop computer, again saving time and money by eliminating the need for a second recording device.  These features are genuinely world-first and are set to revolutionize film production.”

Available in 7" and 17", the Evolution P3 monitors push the boundaries forward for camera monitors. Alongside on-board recording, they also have other unique features including on-board HDMI to HD-SDI conversion, which negates the need for external conversion boxes when shooting with the popular DSLR cameras such as Canon 5D and 7D.  There is also a special mode that allows users to view DSLR pictures at full size rather than the smaller, reduced size picture typically output on a viewfinder.

The unprecedented range of facilities that come as standard with the Evolution P3 monitors were all developed in response to end user feedback for a product that could save time and assist with better camera set up, peaking, false colour and Y/C range checking. They also incorporate a histogram display, a waveform monitor and a vector display.  The SDI video input automatically accepts 3G ( level A & B), HD-SDI and SDI  formats up to 2048x1080/24p. The clear and sharp 1024x600 display gives superb, accurate pictures with brilliant detail across the full colour spectrum and backlight, brightness and colour adjustments. There is also a transflective filter that rejects unwanted light, along with  two daylight modes for shooting in high brightness conditions.

“The Evolution P3 Series are the most advanced camera monitors in the world,” Hathaway adds. “The Series raises the bar in terms of production monitor development and gives production companies a really useful tool that is sure to become standard on every film set.”