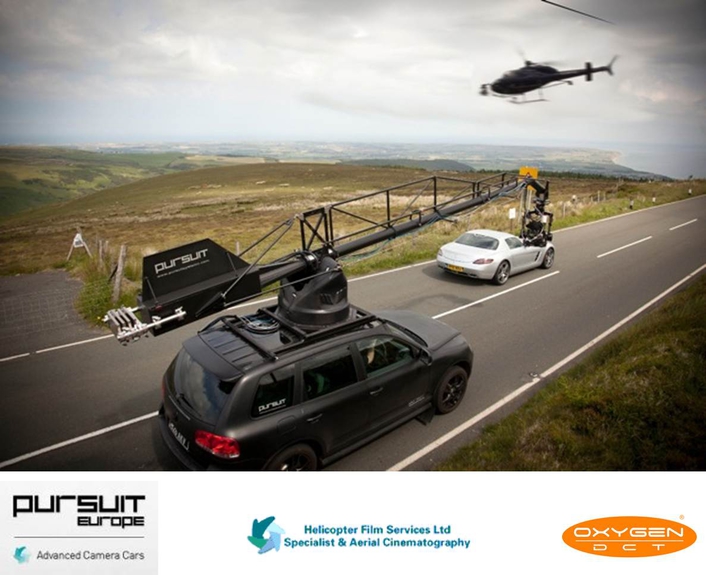 Pursuit Europe operates three camera cars and a quad bike, all of which are used to capture film and broadcast projects. The cars include a mighty VW Touareg V10, a 400bhp Mitsubishi Evo for track and fast work and a Smart Brabus for tight places. The Evolution P3 monitor is currently being used onboard the VW Touareg, where it is mounted into the dashboard.

Jeremy Braben, owner and director of Helicopter Film Services and Pursuit Europe, says the monitor was chosen because it is so compact. Available in 7" and 17" sizes, the Evolution P3 boasts an onboard HD recorder that allows recording from the main camera and instant on-screen playback. Using optional SD-HC media cards, the video recording can be reviewed and stored on a laptop computer, thus saving production time and money by eliminating the need for a second recording device.  Other useful features include camera set-up facilities and on-board HDMI to HD-SDI conversion, which negates the need for external conversion boxes when shooting with the popular DSLR cameras such as Canon 5D and 7D.  There is also a special mode that allows users to view DSLR pictures at full size rather than the smaller, reduced size picture typically output on a viewfinder. 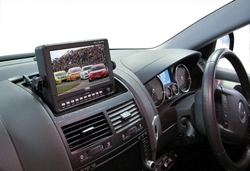 “We were searching for a monitor that offered the right combination of physical size and screen clarity because it had to fit into a specific area on the car’s dashboard,” Braben explains. “The Oxygen guys demonstrated the capabilities of this monitor and suggested we try one in a real environment. We now feel it is indispensible. In fact we are so pleased with its performance that we are fitting it into all our cars – and possibly our helicopters as well.”

Helicopter Film Services came about as a result of Braben’s twin loves - cinematography and flying. The ability to transform the things we love into a viable business is something that the vast majority of us can only dream about, but Braben has succeeded in making his dream come true in spectacular style.

“I learnt to fly helicopters as a DoP in the late 1980s and set up Helicopter Film Services in 1993 with the aim of providing a one-stop, world-wide, full service aerial filming company that could deliver the best possible pictures, no matter what the budget. Since 1993 we have expanded both our premises and our equipment inventory to include the latest in gyro-stabilised technology. This has given us a firm reputation as one of the most advanced aerial filming services in the world.”

Based at Denham airport in West London, Helicopter Filming Services has access to three helicopters that are either permanently or specially rigged for aerial filming. The company specialises in 3D aerial filming and has custom built its own 3D stabilised rig for HD and film cameras including Red, Alexa, Genesis/Sony F35 and 35mm 3 perf and 4 perf.

Having conquered the skies, Jeremy Braben went on to conquer the roads with the formation of Pursuit Europe, which provides tracking vehicles featuring stabilized equipment specifically designed by HFS. 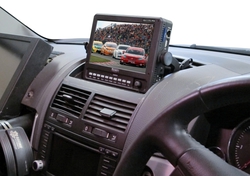 “Pursuit Europe was a natural progression because it made sense to apply the equipment we were already using to other moving platforms, such as cars,” Braben explains. “We saw a need for better and more capable tracking vehicles using our stabilized equipment and so we set about designing our own. Our vehicles now incorporate the Pursuit Arm, which came about through a licence deal with Pursuit Systems USA. This specialist arm is fully operational in the most extreme conditions and has been tested at speeds in excess of 100 mph. It can also operate reliably in extreme weather conditions, whether that involves temperatures above 50 degrees or continuous rain. We can mount any of the popular remote gyro heads and we have created the most user friendly interiors in the business. Our Quick Change Post and Beam camera mount lets you change the camera from front to back, left side to right in seconds. Of course all of our cars come completely equipped with front and rear video monitors and intercom systems and all wheel drive gets the camera where you need it - on road or off.”

Although commercials and feature films provide Helicopter Film Services and Pursuit Europe with the majority of its work, Braben says broadcast projects are on the increase.

“Our stabilized equipment consists of two digital HD Wescam, three Stab-C and four Cineflex HD systems,” he explains. “Two of the Cineflex are permanently rigged to Robinson R44 ENG helicopters belonging to Flying TV, with whom we share a base at Denham airport. The cars can work with any of this equipment or with our open frame, the Stab-C systems, that takes any current broadcast camera and lens, or 3D packages.”

One of the specific issues Pursuit Europe faced – and the reason why it eventually invested in an Evolution P3 – was the need to provide a monitor for the car driver.

“Clarity and viewing angle are critical as the driver just needs to glance at the monitor to get a framing reference,” Braben says. “The other feature which the drivers find useful is video playback. We were using a mini dv tape system but this was slow to cue up. The P3 with SD card recording is much better because it gives us instant playback of the last take, which is great, as well as easy selection of previous takes. We are really delighted with its performance and it has certainly made our job easier.”