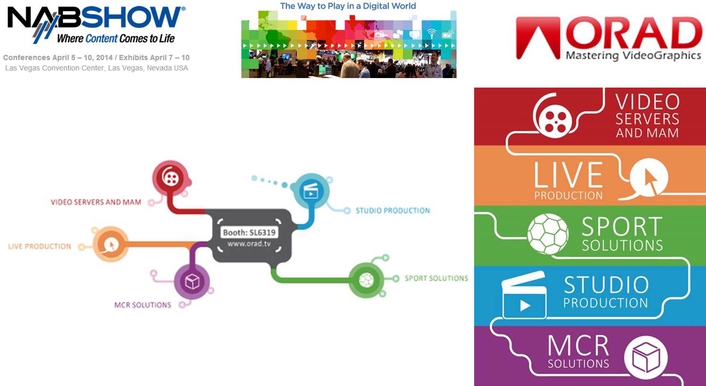 .
Orad will be unveiling for the first time ever its new PlayMaker Combox at NAB 2014, booth SL6319. PlayMaker Combox merges PlayMaker’s 8 channel sports replay server with a fully flagged graphic solution based on Orad’s graphics platform, all packaged in a single 3U compact chassis.

PlayMaker Combox’s powerful graphic engine can be used for different purposes while providing a unique set of benefits. PlayMaker Combox offers real time graphic transitions for highlight packaging and rich video effects, creating visually appealing highlight packages that to date could only be achieved in a post-production environment. In addition, PlayMaker Combox provides a Windows GUI for the graphic operator to control all live graphics during the game including pre game, clock and scores etc. The graphic controller can be tailored for the specific sporting event based on Orad’s Engine Framework, and allows easy integration with stat collection system and other databases.

Also new to NAB is Orad’s Pivot, a Window’s based production assistant application that further enhances PlayMaker’s production workflow. With its intuitive, drag and drop graphic interface, Pivot can be used by any member of the production team. Pivot provides the ability to create and edit highlights playlists, tag and search clips by keywords, clips and playlists playout on multiple outputs, and management tools for multiple servers over the network.

The operator can use the PlayMaker controller and Pivot in parallel, as the extended screen size and drag & drop operation to streamline operation.

For more about PlayMaker Combox and Pivot, come see us at NAB booth SL6319. To book a demo, contact us at nab@orad.tv