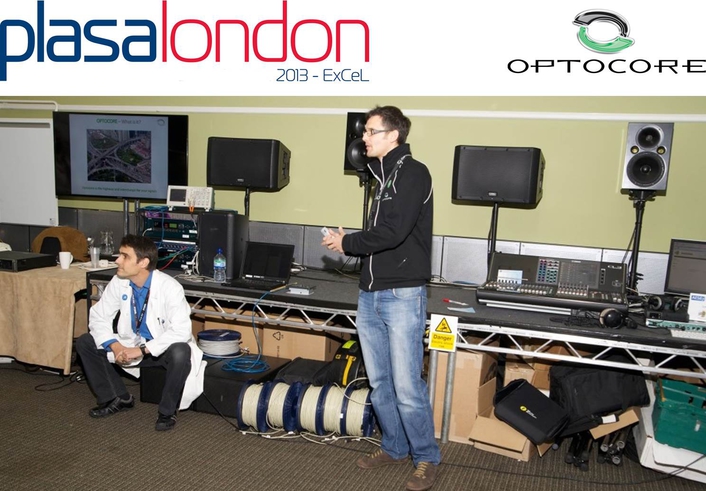 .
Two intense days of evaluation at an event ambitiously billed the “Ultimate Network Shootout” resulted in success for Optocore over five other leading protocols

The comparative sessions took place on the opening two days of this year’s PLASA Show at ExCeL London, and were supervised by Roland Hemming (of RH Consulting) as part of the new AudioLab Interactive experimental concept, which he masterminded.

An impressive number of attendees on each day were given voting buttons in order to register their preference, as six of the most established industry audio protocols — Optocore, MADI, Dante, EtherSound, CobraNet and Analogue — were closely scrutinised. The Optocore solution was voted the best in terms of signal transmission quality by different independent audiences on both days.

The Optocore presentation was made by Support Engineer, Maciek Janiszewski, and supported by Optocore’s UK distributors, Sound Network.

Explaining the process Roland Hemming said, “We tried to be as fair and everyone seemed happy with the methodology. 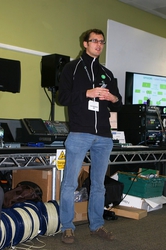 “However, it would have been unfair to play all these protocols in 20 second bursts back to back and expect people to vote; so we put pairs of systems up against each other — Dante against MADI and EtherSound against CobraNet — and the winner of the first two rounds went through in a three way shoot out with Optocore and Analogue.”

He said that while the winner of the first two rounds differed on each day, in the three-way final shoot Optocore always won, with Analogue bringing up the rear. “It was the only consistent result we had and it was a good result for Optocore — although no-one believed that any of the systems weren’t good enough; it was all high quality audio.”

Since DME32 only has four mini YGDAI card slots two were cascaded together, while a common wordclock was used, since DME would drive all simultaneously. However, the individual Wordclock signals on each protocol were compared, which revealed that the Optocore clock was extremely stable, and set itself immediately after connection.

“For Ethernet based protocols higher phase shift, longer locking as well as slight instability could be observed,” stated Janiszewski.

The listening test was just one of a number of network tests conducted as part of six intensive sessions at the new Interactive event, which saw 700 people attend over the four days. The Network Shootout was by far the longest session, yet people remained incredibly engaged, states Hemming.

“Although it was a fairly random, subjective test we are delighted to have won on both days,” concluded Janiszewski.