Optocore Serves up Audio Fibre Transport for US Open

.
Optocore, a leading provider of scalable, high-bandwidth, low-latency fibre-optic networks for the transmission of audio, video, intercom and data in a variety of markets, was chosen by Audio Incorporated, supplier of sound reinforcement and communication equipment for U.S. Open Tennis, to provide X6R-FX-INTERCOM devices for the communication system used during this year’s U.S. Open opening ceremonies. The event was held at Arthur Ashe Stadium, part of the USTA Billie Jean King Tennis Center in Flushing Meadows-Corona Park, Flushing, Queens, New York. The Grand Slam tournament began on August 26 and ended on September 9.

As Mike Sinclair of Audio Incorporated, the audio designer for the U.S. Open live events for the past six years, explains, “We needed to find a way to connect the roof of the Broadcast Center building with our central patch area at the other end of the stadium in the photographers’ pit. We had to be ready to transport the programme audio feed, Clear-Com Encore Analog Party Lines converted to 4-wire for a production channel and a lighting channel. We also used Optocore’s 100Mb LAN tunnel between devices to network show control computers and DMX lighting control together.”

Audio Incorporated employed Optocore X6R-FX-INTERCOM devices using the fibre infrastructure of Arthur Ashe stadium to connect and multiplex the various different audio and data streams over one pair of fibre lines. “We had to be ready for any eventuality and the Optocore X6R-FX-INTERCOM performed flawlessly with connectivity to spare,” Sinclair said.

“We needed to get communications and audio up to the highest reaches of the stadium, in a hyper-crowded situation,” says Rom Rosenblum, events communication system technician, U.S. Open, and applications engineer, Clear-Com. “CBS, ESPN and every broadcaster covering the event was already hooked into existing copper lines. Without the Optocore devices, we’d have been communicating with cell phones to run the Arthur Ashe Kids’ Day event and Opening Ceremonies. Instead, as soon as we got the facility to install a piece of glass up to the roof, we were in business. A plug-and-play solution was never more welcome!” 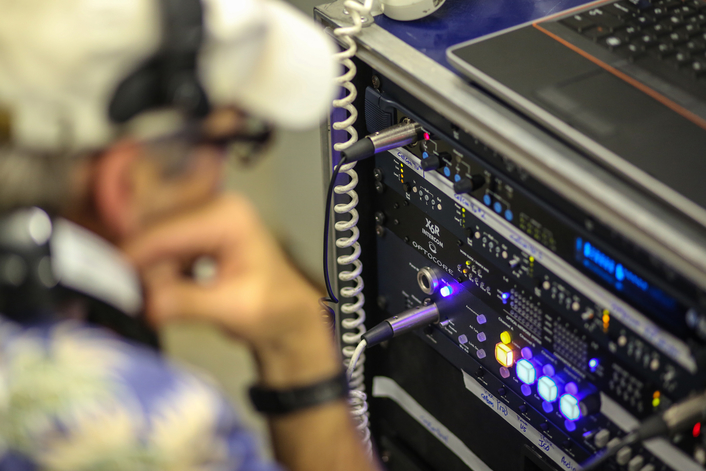 Rosenblum also cites Optocore system’s comprehensive front panel level meters and status indicators as invaluable as well. Known to be a favourite feature among audio engineers, this combination allows instant visual verification and provides an immense troubleshooting aid for cabling problems. Additionally, he says the LAN feature made it easy for the team to access their network anywhere in the system.

The X6R-FX-INTERCOM has eight intercom duplex channels including data. The device can also be used as eight line inputs plus eight line outputs, plus four serial I/O or two GPIO.

“Optocore’s fibre systems are known for their top-notch features, immense reliability and dual redundant fibre runs and power supplies/sources,” summarises Mike Sinclair. “By utilising Optocore, rather than copper cables, we were able to save time and effort for all of our communication needs during the U.S. Open.”