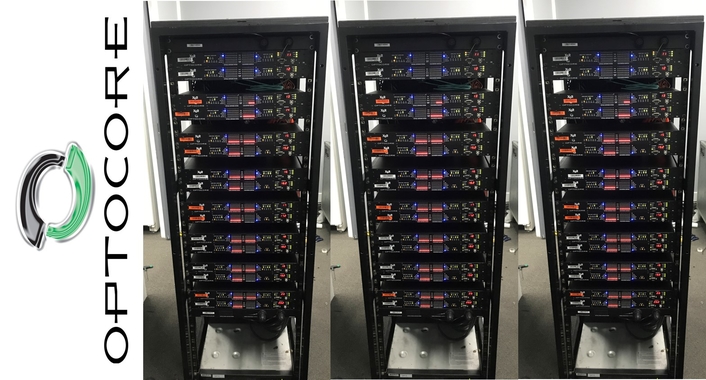 German fibre network giants Optocore ended 2017 on a high, by reporting substantial investments by consolidated resellers in further Optocore devices — from all over the world.

Leading the way were global rental giants CLAIR Global, who have substantially increased their Optocore inventory as they gear up for a major, as yet unannounced 2018 tour.

Having used Optocore DD series solutions for some time, mainly with their vast inventory of DiGiCo SD series mixing consoles, the Lititz-based company has added a further six DD32R-FX network converters and pair of DD2FR-FX AES/EBU.

CLAIR Global Console Dept Manager, Jonathan Shober, stated that previously the company had enjoyed a brief experience with an LX4 system prior to utilising Optocore with a DiGiCo D5. “Our clients continually ask us to push the envelope,” he said. “With regard to the new tour, it was suggested that an audio network be used to distribute the signals to multiple zones. Both parties had previous experience with Optocore, so it was the obvious choice.

He summarized by saying, “Our past success rate with the brand gives us the confidence we need to feel comfortable tasking it with one of the most crucial parts of the control system — audio distribution to the PA.”

Other long-term users of Optocore solutions were equally bullish. One leading European rental company to increase its Optocore inventory is Paris based Lumière & Son.

Company president, Pierre Heyligen, confirmed that they had added a further M12 MADI switch, with bridging and routing options, and DD4MR-FX MADI interface as part of a general inventory upgrade.

Pierre reports heavy usage of Optocore devices in the last quarter of the year, including the Red Bull Soap Cans Race, the most original car race in the world, in Paris’s Parc de St Cloud. Here they used 10 BroaMan MUX22, a pair of Y3R-TP and X6R-TP-8MI/8LO for video distribution, PA sound control and Clear-Com intercom.

Also in France, long-term Optocore partner, GB4D has boosted its inventory by adding a pair of X6R-FX-8MI/8LO. Gilles Bouvard’s company ended 2017 by equipping the Courchevel 1650 ski resort. They used an L-Acoustics broadcast system to reproduce the sound of the ski school tracks in the snow. An Optocore connection was made with the X6R-FX-8MI/8LO between the ski instructor's office and the ski school's booth speaker. They also supplied the company JBL Sonorisation with two Broaman Nano kits, to expand its rental fleet.

At the end of the year GB4D also provided coverage for the French Federation of Ice Sports’ figure skating show, broadcast on France Television. They made an Optocore loop with five X6R-FX-8MI/8LO and a DD2FR-FX for sound, light and Intercom.

Close to Optocore’s German base, B&R Medientechnik have bolstered their stock of Optocore interfaces and now have an 80-channel Mic Preamp Stagebox, built using X6R-FX and X6R-TP with various combination of 16LO and 16MI boards modules, in addition to DD4R-FX and a DD32R-FX.

States the B&R’s Benjamin Kugler, “The fact that our Optocore interfaces can now be connected to our [Avid] Pro Tools HDX system and also expand our DiGiCo setup at other events creates real synergy,” he says.

Specifically, this will apply to a new TV format from the MDR and Deutsche Welle TV station. For the show Privatkonzert/Night Grooves music and talk show, the complete TV broadcast sound is produced in their Audiomobil 4.

“For this show, many audio signals come together from many sources,” explains Benjamin. “This includes guest bands in the conservatory, house band on the staircase, lots of wireless microphones, while on the sofa there is always music. Implementing this with an analog system would mean a lot of work with a lot of potential for error.”

On the other side of the world Norwest has continued its investment in Optocore by purchasing four X6R-FX-8AE/8MI, four X6R-TP-16MI, four DD32R-FX and a pair of DD4MR-FX interfaces.

Justifying the substantial investment Head of Special Projects, Andrew Marsh, confirmed, “We have recently taken to using Optocore as both our main and backup network on large special events. And it also happens that is solves some unique networking issues with DiGiCo consoles across some other Opera shows as well. So, we decided to proceed with another sizeable purchase from the ‘R’ FX range.”

Optocore has often been Norwest’s first choice for major events, and 2017 saw the Opening & Closing Ceremonies of the South East Asian Games in Kuala Lumpur.

2018 is shaping up to be a big year for Norwest, as they will deliver stadium audio for capacity crowds and the world-wide broadcast audience who tune in to watch the Opening and Closing Ceremonies of the Commonwealth Games, being held at Carrera Stadium on the Gold Coast. When you also add in the Handa Opera on Sydney Harbour (HOSH) this made the purchasing decision an easy one, says Andrew.

This will augment a system purchased back in 2015 for the South East Asian Games; prior to that they purchased another Optocore system back in 2008.

In Israel Sincopa ended the year by purchasing M12-OPT/BNC, X6R-FX-16MI and two X6R-FX-INTERCOM devices. Said Head of Sound, Eran Pereldik, “We are continually growing our Optocore inventory due to demand and the new units will be in use as soon as they land.” Recent high profile events covered by SIncopa include Maccabiah (Jewish Olympics) Opening Ceremony, while international artistes that have appeared in Tel Aviv include Aerosmith, Britney Spears, Guns n’ Roses and Justin Bieber.

“Whenever we have to send signals over long distances we will use our Optocore system,” Eran confirmed. “It’s very easy to configure, and makes our systems easier for interconnection and tuning. We also use the units as extra I/O for our DiGiCo systems.”

Based in Munich, Germany, OPTOCORE is the world market leading provider of high bandwidth, low latency, resilient, scalable and flexible fibre optic based networks for the transmission of audio, video and data. For 20 years, Optocore has been continuously innovating and setting new standards with regards to digital network technology. OPTOCORE builds and develops synchronous optical fibre and CAT5 based network solutions for broadcast professionals — for fixed installations and live event applications. Utilising leading-edge technology and high-quality components Optocore guarantees durability and therefore long-term market and customer satisfaction. Due to the open system architecture, Optocore’s platform offers other manufacturers the option to transfer conventional standard audio, video and data formats used in the pro audio industry, via an Optocore network. Technical expertise, QoS and an extensive support structure are guaranteed to all customers, together with the highest level of quality.