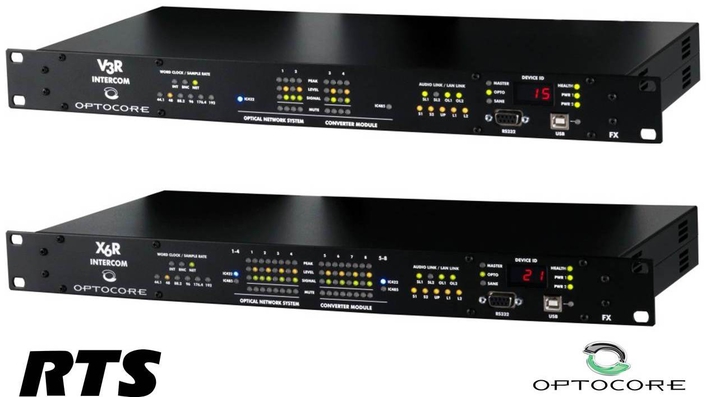 Based on Optocore’s well-known V3R-FX / X6R-FX1U series architecture the devices are equipped with standard RJ45 interfaces, which make cabling simple and cost-efficient. As a result of creating an intercom version based on these converters, the new intercom devices are also Line-In and Line-Out converters.

The V3R-FX-INTERCOM for RTS integrates seamlessly into the Optocore Optical Digital network system and intercom inputs can be routed to MADI, AES/EBU or Line outputs, with Intercom messages and control data from RTS user panels or matrix sent transparently through the optical network. Each single intercom channel can be routed to every INTERCOM device in the network via the Optocore Control software.

The V3R-FX-INTERCOM device is equipped with eight RJ45 intercom interfaces  — four ports for panels and four ports for matrix. The pin out of the connectors is compatible with all RTS devices, so there is no need to use special cables or adapters — a standard straight CAT5 can be used.

The Word Clock IN and OUT enables the synchronisation of the units to an external source and is used to pass on the word clock from one unit to the next. For stand-alone applications, the devices are equipped with an internal word clock.

The FPGA (field programmable gate array) based concept of the internal logic circuitry permits updating of the firmware ensuring a continual state-of-the-art device.

The X6R-FX-INTERCOM for RTS has similar architecture and features, but with eight ports (to Panel) and eight ports (to Matrix); one port can be used either to Panel or to Matrix — though not at the same time (for example Ports 1-4 may be connected to RTS panels and ports 5-8 to RTS Matrix).