Optocore and Partners Steal the Show with Three-Way Comms Network

The two companies — along with Clear-Com — certainly ring fenced the opening morning with successive ‘virtual’ press conferences, where the media thronged to the stands — first to see DiGiCo MD James Gordon hosting, with marketing director Dave Webster speaking remotely from the Optocore stand, followed by Bob Boster, MD of Clear-Com, who was beamed in from the Optocore stand as Simon Browne anchored the press call from Clear-Com’s stand location.

The three stands were connected via single mode fibre — all made possible by the new DiGiCo implementation. Visitors were clearly able to see the remote X6R mic preamp on the Optocore booth being controlled from the console on DiGiCo’s booth.

But what is the new software that enables Optocore’s X6R and V3R mic preamps to be controlled directly from the console?

“By adding a simple Optocore 16-channel X6R-FX interface to the DiGiCo network extra I/O connectivity can be achieved together with Ethernet and RS485/422,” explains Optocore founder, Marc Brunke. “They can also use Optocore’s cost efficient DD2FR-FX and DD4MR-FX MADI interfaces to increase the number of MADI ports available on the console.”

Although Optocore partners with multiple console manufacturers, only DiGiCo has OEM Optocore and is running the native 2.21 Optocore protocol. “With both companies' R&D departments working closely together, we have managed to join two systems together in an intuitive and elegant way,” he said.

Having proven the concept — and demonstrated how easy it was to add professional video signal layers on top of the Optocore technology, to create high-bandwidth and high-channel count systems — when it came to Brunke’s turn to address the press there was nothing left to prove. And so he switched the emphasis from the network to his new ‘MADI over Cat5’ standard which has now been ratified by AES. This extends the AES10 MADI standard by allowing twisted pair Cat5 connectivity in addition to the current options.

He explains, “This complete, cost-effective solution provides the bridge between low channel count and high channel count devices. Up to now MADI has been too expensive for low channel devices — but this is no longer the case. Also, because the new version makes MADI compatible with IEEE802.3, it can now be used in combination with other recent network standards like AES-X210 / AES-67 or older proprietary Ethernet implementations.” 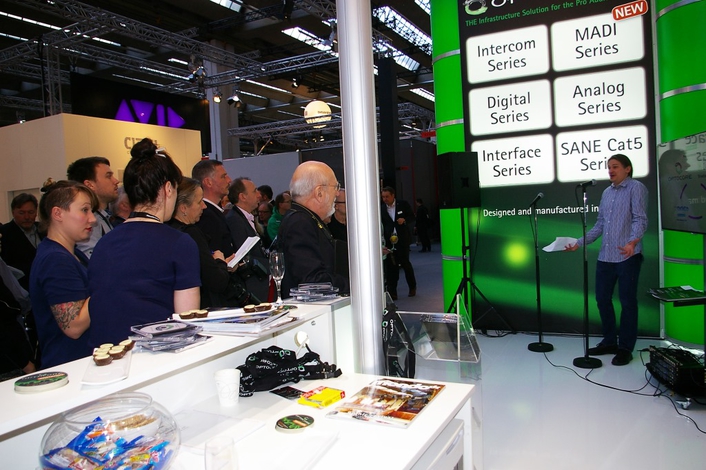 Marc Brunke presents the MADI over Cat5 standard to the press

The Optocore booth remained packed throughout the four-day show, topped off with a party on the opening night when the Munich-based company were able to treat press and customers to some genuine Bavarian hospitality.

Commented marketing director, Tine Helmle, “This was unquestionably our most successful trade show participation ever. The network created a real buzz as a result of which we received many new enquiries as well as being able to forge closer links with our existing global reseller network.”

And DiGiCo MD James Gordon backed this up, hailing the new agreement between the two companies. “We believed that this live demonstration was the best way to demonstrate just how easy the system is to use,” he summarised.