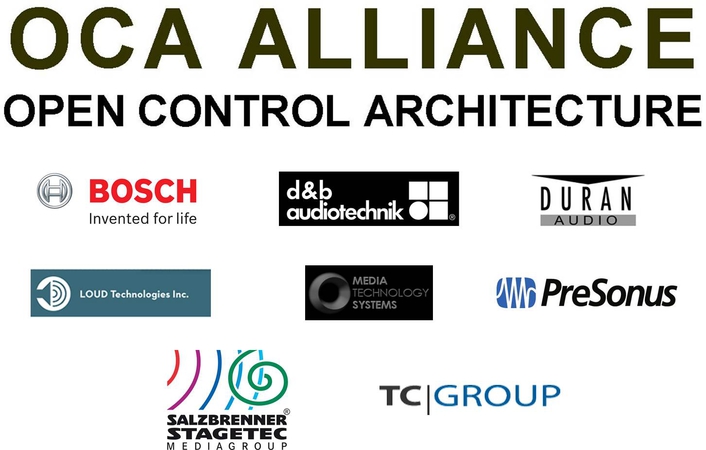 Developed recently by Bosch Communications Systems, OCA is descended from AES-24, a system control protocol developed by the Audio Engineering Society in the 1990's. OCA defines a flexible and robust control standard that covers the entire range of pro media networking applications, from the smallest to the largest. OCA is not a media transport technology, and does not replace evolving media transport standards such as AVB. Instead, it is intended to complement such standards by providing a reliable and rich system control environment. Together, media transport and system control standards will enable complete multivendor media network solutions in the future.

By adding system control to the media network equation, OCA will allow devices from multiple manufacturers to share a common management regime, thus allowing system designers and owners the freedom to specify the components they want without compromising overall integration and usability.

OCA is specifically designed to address the full range of professional media networking use cases, from small to very large, including cases where media networks have critical security and/or life safety roles. OCA is adaptable and future-proof, and will support multivendor media network applications now and in the future.

It is the hope of the Alliance that OCA will become widely adopted, leading to a new era of multivendor interoperability in which media network customers have an increased range of choice, and engineered media networking solutions offer new levels of functionality, flexibility, and overall value.

Alliance work will be done in two phases. During Phase 1, which begins today, the eight founding members will refine the OCA specification and prepare it for passing to a public standards organization. Phase 1 is a fast-track exercise, in which active membership will be restricted to the founding members. Other companies may become Observers on request.

During Phase 2, the OCA specification will be transferred to the public standards organization, and the Alliance will continue with ancillary OCA promotion and support work. Active Alliance membership will be open to all in this phase; as well, companies will have the option of participating in the standards organization in the usual way.

For further information, or to enroll as an Observer, please contact the Alliance Administrator at: stephan.lietz@oca-alliance.com