.
Sennheiser’s most successful microphone series is celebrating its birthday at ProLight+Sound 2013! In 1998, evolution microphones were thrust into the spotlight for the first time, providing bands with a complete microphone solution for flawless and rich sound for both vocals and instruments. Since then, the company has sold some 10 million wired and wireless evolution microphones.

evolution microphones are designed specifically to withstand the rigours of live stage performance, excelling at meeting a range of specialised needs in this demanding market. At the same time, the series manages to strike the right balance between affordability, impressive sound and high-quality workmanship. The evolution series has the right microphone for any performance, regardless of whether the stage is big or small. They are a permanent fixture of the sound tech’s rider for countless bands and events; at the last Grammy Awards alone, 80 evolution microphones were in use, from the e 935 for vocals to the e 602-II for kick drums.

A look back: a courageous step paves the way
Before the introduction of the evolution microphone range, Sennheiser’s professional microphone offering was dominated by classics such as the MD 441, MD 421 and the MD 409, as well as mics based on these models. “The company’s focus was clearly on the TV area, on high-quality microphones for use in broadcasting and TV studios,” says Michael Polten, Director of Customer Relationship Management at Sennheiser, “and not every microphone that has been optimised for broadcasting can be so easily transferred to the live stage.”

Sennheiser was faced with a complex problem: the company knew that if it wanted to be more successful in the music industry, certain price limits could not be exceeded. At the same time, the company wanted to continue to focus on quality, with microphones that were made in Germany.

In the end, the solution was the domestic manufacture of high-quality microphones through a fully-automated production process. This represented a major financial and technical risk because such a production line had never been built before. Together with an engineering company specialised in precision engineering, the company’s manufacturing engineers and product specialists started to develop a production line for manufacturing dynamic microphones and capsules.

1998 and one year later: the first mics started rolling off the assembly line and the evolution range was launched. The company’s willingness to take a risk paid off through a comeback in the music microphone industry that was nothing short of spectacular. The original models of the evolution series included the wired vocal microphones e 825, e 835 and e 845, as well as instrument microphones e 602, e 604, e 608 and e 609, with more models added over time.

evolution 900 Series – designed for the most demanding tasks
In 2003, the first premium evolution 900 models were added to the evolution microphone series. Sennheiser’s tonmeister and International Recording Applications Manager, Gregor Zielinsky, fine-tuned the sound design for the new series: “With the microphones of the 900 series, we started a new tradition of testing the microphones from the outset in the environment in which they are actually used. We took the first prototypes straight to a music club we know well, where they were put through their paces by musicians and the developers. Once there, we could hear directly where changes needed to be made to the sound, or where more presence or brilliance was needed. Our developers – with their design and music expertise – then usually knew which refinements and tweaks were required to achieve the sound quality they were after.” 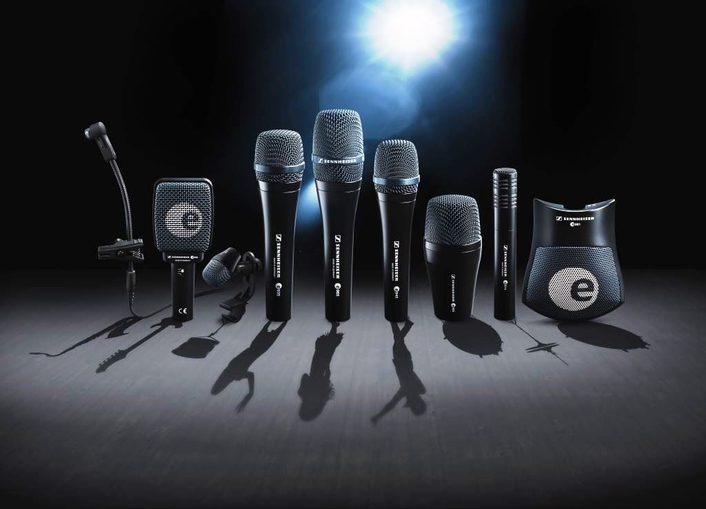 In record time, the 900 series has become a well-known brand among bands, artists and sound engineers. The sound of the vocal capsules and, in particular, the sound of the 935 capsule is very popular – it even lent its sound signature to the MD 5235 capsule, which was designed for the top-end wireless SKM 5200 microphone. 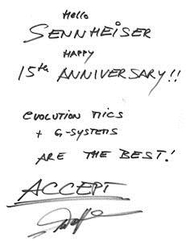 Best wishes from around the world
What birthday would it be without well wishes? Several bands, artists and sound engineers have sent their good wishes to evolution in the form of video messages – they can be viewed in our press portal or our official Sennheiser YouTube channel https://www.youtube.com/sennheiserofficial

1999
The wireless sensation: only one year later, Sennheiser brings a radio microphone series to the market for vocals, instruments, speech and reporting.

2000
With the e 865, the company launches the first condenser vocal microphone in the evolution series. Sting and his sound engineer Vish Wadi helped to fine-tune its sound

2003
Launch of the first microphones of the 900 series, including the vocal microphones e 935 (cardioid, pictured) and e 945 (super-cardioid).

Launch of the second generation: the evolution wireless G2 series revolutionises the set-up of wireless systems thanks to its broader switching bandwidth, scan function for free channels, intuitive operation, improved RF and AF properties and much smaller bodypacks.

2007
Launch of the MD 5235 microphone head for the SKM 5200. In terms of its sound quality, the head is based on the evolution 900 series; it was specifically developed for singing under particularly loud stage conditions. 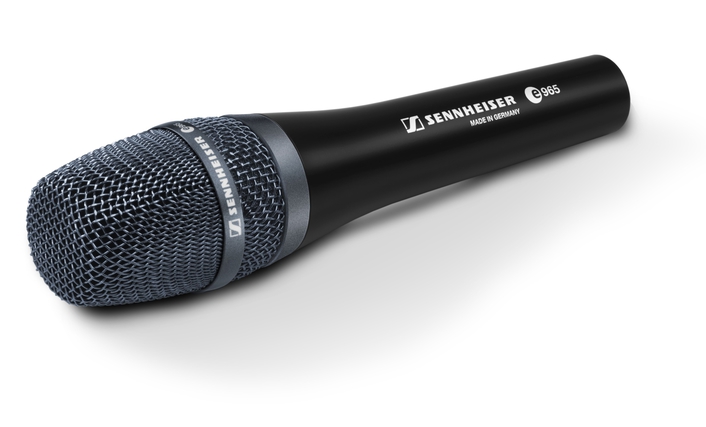 2008
With the new e 965, Sennheiser introduces the flagship microphone of the evolution series and its first true condenser, large-diaphragm microphone. The e 965 has a dual-diaphragm transducer and can be switched between cardioid and super-cardioid pick-up patterns.

2009
Launch of evolution wireless G3, the third generation of the evolution wireless microphones.  The series has new convenient features such as IR synchronisation, Soundcheck mode, frequency coordination via the Wireless Systems Manager, wider audio range and interchangeable microphone heads for the hand-held transmitter – including the sound of evolution 900 capsules.

2011
Sennheiser is the first manufacturer to launch wireless microphone systems that transmit at a frequency of 1800 MHz. In response to the decision to close UHF frequencies from 790 to 862 MHz for wireless microphones in Europe, the evolution wireless ew 100 G3‑1G8 systems move to a higher frequency band that is reserved exclusively for wireless audio transmission in many European countries.