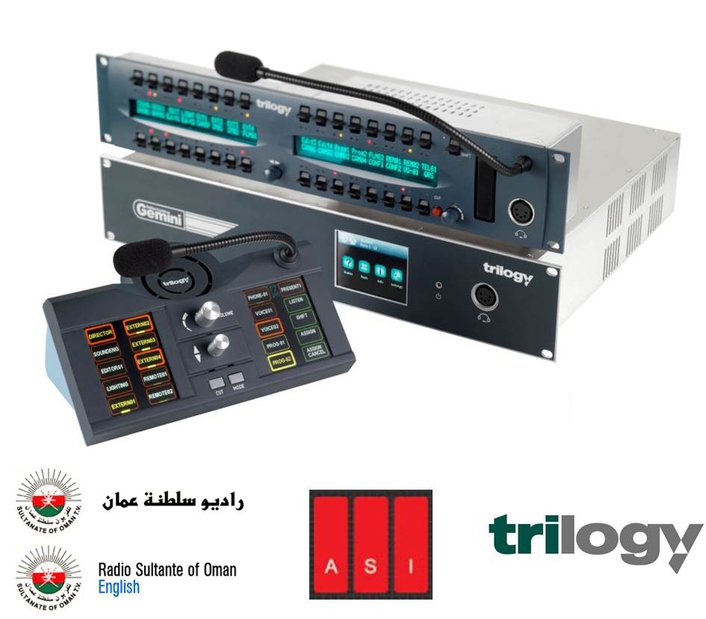 Gemini Intercom will work alongside Mentor XL to ensure the continued success of Oman Radio
Trilogy Communications, the global provider of intercom systems and Master Reference Generators to the broadcast industry, announced that it had been awarded the contract to supply audio communications and referencing equipment to a major Gulf States broadcaster.

The contract covers both a Gemini Intercom system for audio communications and Mentor XL Master Reference Generators to provide essential synchronising and referencing signals for all of the audio systems. The dual redundant system generates AES and Wordclock reference signals in addition to Timecode and NTP using GPS receivers to maintain signal integrity and synchronisation.  This contract continues Trilogy's presence in the region which extends back to their first Commander communications systems installed in 2002 with this same broadcaster.

Although the primary function is to provide intercom between studios this project does have a number of features that are more commonly found in radio than television production. These include the automatic control of programme speaker muting or dimming during communications.

The other key requirement was to allow studio personnel to be able to communicate with their counterparts in the other facilities. This will be facilitated using the native support found in Gemini for SIP (Session Initiation Protocol) connectivity. The use of SIP will allow Trilogy's latest generation of Gemini Intercoms to interface with other intercom systems via a standard SIP server, providing a level of interoperability previously not possible whilst also protecting the client's previous investments. Although SIP has been promoted by the EBU to allow audio to be exchanged freely between intercom manufacturers adhering to the EBU specification, Gemini's enhanced functionality will permit users in disparate systems to call each other using a single button press.

Commenting on the contract Zubair Sabawi, Managing Director of ASI Ltd said "This is a prestigious contract and having looked at all the options we felt the Trilogy solution is the best fit both in terms of features and reliability." He continued "Trilogy's reputation for reliable customer support is also a major plus point for ASI."

About All Systems International (ASI) Ltd
All Systems International Limited is a market leading broadcast systems integrator formed in 1988. Headquarters in Poole in the South of England, with operations reaching as far as USA and the Middle East. ASI Ltd has been as industry Leader for more than 20 years, our growth has been achieved by building a dedicated team of experienced business and technical professionals, establishing partnerships with market leading manufacturers and taking time to understand the markets in which our clients operate.

ASI's cost effective approach has led to it becoming one of the major suppliers to Government Departments, Broadcasters & Re-Sellers.  ASI's aim is to exceed customer's expectations. To achieve this, ASI works closely with customers to be certain expectations are understood and to ascertain that they are, in fact, achievable. In many cases, ASI's role is to help define that expectation, then using every resource to meet or exceed it.

About Trilogy Communications
Trilogy has supplied audio communications equipment to customers in more than seventy countries since 1986. The company was originally formed to design and build video and audio infrastructure equipment for the television and radio broadcast market. It continues to serve this market but now also offers its products to a wide array of customers in defence, emergency management and training and simulation, oil and gas, gaming, and other industries.Trilogy counts some of the world's best known names among its customer base.These include BBC, ITV, CBS, ABC, Fox TV, France Television, Arqiva, Star TV, Times TV, Qatar TV, Al Jazeera Sports and many others.