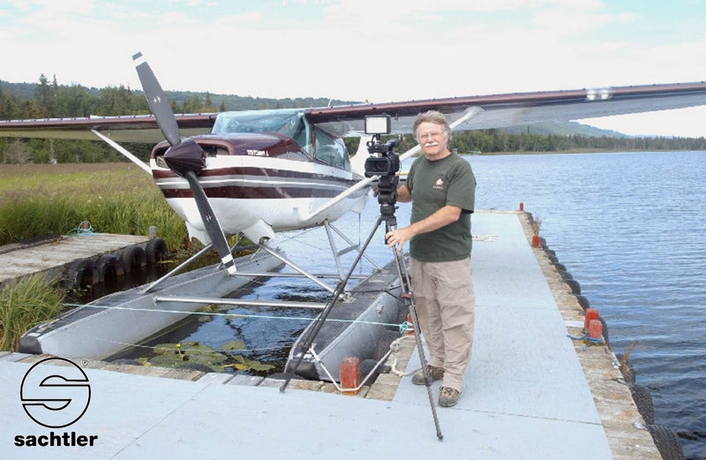 Jim Oltersdorf worked with the System FSB 6 T for a documentary in Alaska
When Jim Oltersdorf takes on a project, you can bet it’s in “high risk” areas of photography. He’s never one to sit in the studio (except when he’s teaching – and even then he pulls his students into his extreme world). Such is the case of Oltersdorf’s recent expedition ”Alaska’s Bush Pilots – The Real Deal”. This compelling, vibrant story of the great far north and the modern day pilots was filmed in the wilds of Alaska in high-definition. Jim Oltersdorf works with the System FSB 6 T from Sachtler, a Vitec Group brand.

The documentary includes magnificent scenery of this raw and dangerous land along with footage of spectacular giant Alaskan brown bears, spewing volcanoes, eagles, moose, caribou and a host of other wildlife. The story is interlaced with in-depth and exciting interview of these courageous pilots as they recall many different stories – some serious – some hilarious. Oltersdorf’s mission was to “fly” the audience in the seat right next to these men.

Alaska is a land of extremes. Temperatures that plummet down to -70 °F / -55 °C without wind chill are common in the winter. Add hurricane force winds that can freeze exposed flesh within a minute to the mixture and you’ve got inhospitable territory. “It is not for men or machines unless one is prepared as these elements are just a few of the ‘get ya’s’ when a filmmaker is in this most magnificent wilderness,” says Oltersdorf.

“In Alaska, each and every piece of equipment has got to be the best when we take it hundreds and hundreds of miles deep into the wilderness,” he says. “Because there are no roads, everything has to be flown in by a small aircraft. We can’t take two of everything so each piece of equipment HAS to perform flawlessly or it becomes disastrous. Failure means a huge cost and, as a filmmaker, I am responsible for each success. Sachtler tripods take the worry and concern away for many different reasons.”

Small and Light but with a Big Impact

“Sachtler lightweight tripods allow me to carry them aboard these small aircraft easily, as each ounce is of concern,” he explains. “They are compact, portable and as rugged as a grizzly. I am always amazed at how nice and easy they are to use. They are smooth as butter, even when exposed to the unbelievable cold and freezing rains. I never worry about breakdowns with this equipment. It might be other pieces, but it never is with Sachtler. And, that is a great comfort, which allows me to concentrate at the other huge task at hand.”

“It is not often, especially in my high-risk and extreme photography, that I am introduced to such high-quality items that actually assist me in my efforts to produce the kinds of imagery that these tripods offer,” he explains. “I love the ‘one flick’ method of releasing the entire leg with a single lever! When the action is fast, while filming giant Alaskan brown bears, if you want the shot – I always say ‘Get a Sachtler’. It’s that simple!”

No Fatigue with Sachtler

“Carrying equipment miles and miles on our backs from base camp means we demand that it is lightweight. If not, our fatigue level can become a very detrimental ghoul that will affect the quality of our focus on the task at hand. With Sachtler, I never have to concern myself with the weight. I compare it to the F-22 Raptor fight jet. Fast, direct and to the point. When something is so well engineered, it will always stand out. Sachtler is locked in and on target!”

“The Real Deal” Takes Off

“Alaska’s Bush Pilots –The Real Deal”, is only one in a career filled with extreme photography projects for Jim Oltersdorf. This particular production has attained world-wide release and is available on HD DVD video at