Doug Hunt Sound & Light works with a number of production companies, including events at Abbey Road (in fact they auditioned the MLA Compact system in Abbey Road’s legendary Studio One). The company saw an opportunity to invest in the growing portfolio of MLA products and ensure they are always one step ahead of the competition by offering the MLA control and quality of sound. 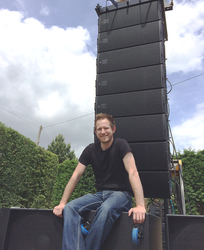 Doug Hunt, owner of Doug Hunt Sound & Light, states, “I am absolutely amazed at this system. The reaction I receive from all working around us is one of astonishment that the sound is so linear. I have mixed on many systems in many venues and I know when I revisit these same venues that the MLA Compact will allow me to do my job properly!

”Rigging and training took place at Doug Hunt Sound & Light’s Essex base where Martin Audio Application Support (Touring), Andy Davies, spent three days with Doug Hunt and his staff, while scenarios were played out and the system tailored.

Also present at the sessions was Phil Clark from Old Barn Audio, who said, “We are very happy to have sold this MLA Compact to Doug Hunt Sound & Light. Doug has been a fantastic customer over the years and we know his company will now flourish further and faster with the MLA Compact being part of his stock holding.”