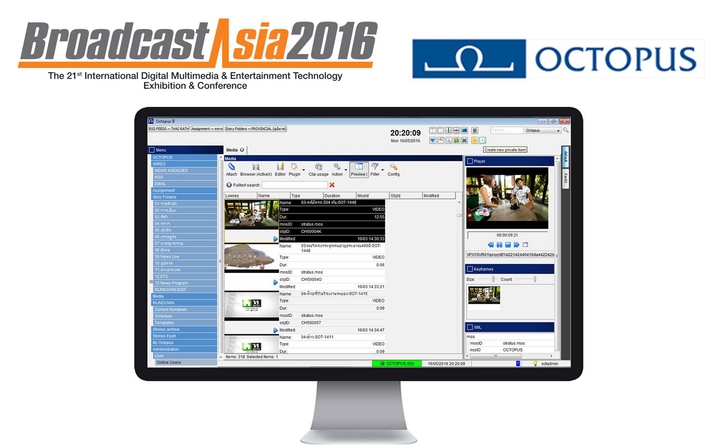 "With audiences expecting to watch, hear and read bulletins on their choice of device and at their choice of time, we have focused development on making the sharing of news items and information across departments easier and faster than ever," Miro Rusko comments. "Octopus 8 enables users to collaborate with other teams and deliver stories in multiple formats for the widest possible audience. It streamlines operations and workflows so that all necessary production information, including news sources, clips and stories, is now available to at a glance."

"Pressure on journalists to hit deadlines is enormous and continues to increase," adds Sales Director Gabriel Janko. "Octopus 8 features a new dashboard GUI which brings together every assignment, notification and update. Until now, newsroom solutions have treated social media as an add-on feature. Octopus 8, Twitter, Facebook and Instagram are fully integrated into the newsroom. Social media are now treated with the same importance as a traditional news feed or a programme rundown. This is a big advantage which reflects the huge importance of social networks to channel owners and audiences worldwide."

Octopus 8 gives administrators the ability to assign users to create content for social media. Tweets and Facebook posts are treated like any other news story with team managers able to assign and share tasks, and to approve posts before they go live. Journalists can now follow Twitter trends and track topics of particular interest to them across the social network in real time. The research process is now automated, giving teams instant information and analyses trends over time. Editors can tweet, reply, re-tweet or favourite directly from Octopus as well as manage the channel’s relationships by following or blocking Twitter users.

With audiences increasingly using the internet for their news, media organisations are under ever increasing pressure to publish stories to the web. Octopus 8 directly interconnects with CMS systems such as Wordpress, Joomla, Drupal and Core Media, allowing scripts and articles to be uploaded dynamically to web portals. This new web component enables TV news editors to upload pages directly, saving time and reducing the workload on web managers. Another new feature is the ability to publish social media posts directly from the rundown.

Also making its BroadcastAsia debut, the new Octopus Mobile App offers journalists full news production capabilities on tablets and mobile phones running Apple iOS or Google Android. Reporters and editors working remotely gain instant access to all wires, rundowns and assignments. They can also edit stories within a rundown, preview prompter text as well as create wires and reports in the field. The new app supports both Octopus 8 and the most recent versions of Octopus 7.

"This new resource confirms our strategy of getting closer to our customers, whether for pre-sales information and demonstrations, engineering and operational issues or post-sale advice," Miro Rusko adds. The aim of this investment is to increase the quality of our existing 24/7 support capability. We will now be able to respond to customer requests within, or at least nearer, their national time zones rather than expecting them to think in terms of European time. Our focus will be on the entire south east Asia region, working faster and on a more personal basis. This will help particularly in the area of proof-of-concept tender fulfilment where documentation needs to be processed quickly."

Established in 1999, OCTOPUS Newsroom is a leading producer of newsroom computer systems in the TV broadcast industry. OCTOPUS Newsroom has successfully installed newsroom systems into more than 200 channels around the world. These include networks such as Mediacorp in Singapore, Euronews in France, Bloomberg throughout South East Asia, India Today Group and Channel 5 in Thailand. Based on Unicode, OCTOPUS Newsroom products support all major character sets including Chinese, Japanese, Korean, Thai, and Vietnamese.