NTP Technology introducing new router and audio converter to Latin American market
Exhibiting on stand E/2 as part of the Danish Sound Technology Network, NTP Technology will be promote the latest additions to its range of ultra-high-quality routing systems and AD/DA interfaces at the 16th AES Expo in São Paulo, 8-10 May.

It delivers the additional benefit of being easier to use than traditional leased-telco-line systems because it is fully controllable via NTP Technology's intuitive VMC software. The Penta 725 IP router has a capacity of 1024 x 1024 crosspoints and can accommodate 64 bi-directional channels via IP. It can also be populated to handle 64 AES3 input/output channels, six optical MADI channels and optional sampling-rate converters interfaces. Penta 725 IP systems can be combined to handle a total of 512 channels on a 1 gigabit/s network. Larger systems can be integrated where greater network capacity is available. 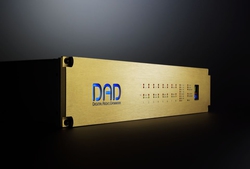 NTP Technology will be represented at AES Expo 2012 by Mikael Vest (Sales Director) and Nestor Almeida from regional distributor Stirling do Brasil.