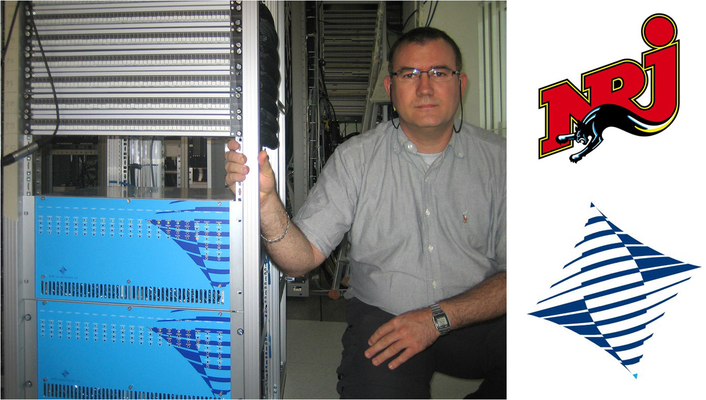 Mark Begat with the newly expanded NTP routing system at NRJ Paris
NRJ, one of Europe's most popular music broadcasters, has expanded its NTP 612 routing system with three additional subframes. Newly installed at the channel's Paris headquarters, these are equipped with three 625-800 subframes allowing direct input of AES/EBU digital audio. This latest expansion is additional to three 625-800 subframes installed at NRJ in 2009. The sale was won by NTP's Paris-based reseller Areitec.

"Radio NRJ installed its first NTP 612 router 15 years ago and it is still working efficiently on a 24-hour basis" comments NTP Sales Director Mikael Vest. "That says a lot both for the reliability and expandability of the 612. The new installation is a natural progression of Radio NRJ's existing NTP infrastructure and handleS analog as well as digital sources via new subnodes. The expanded NTP installation is being used in conjunction with Axia IP-based audio mixing consoles."

NTP's 625-800 is based on a TDM bus architecture which can be configured for up to 8,000 x 8,000 crosspoints, with full simultaneous switching. Occupying a 5 U high 19 inch chassis, it can operate as a main controller or as a subrouter with a fast switching capacity of 300 switching events per second. Each NTP 625-800 contains two 625-151 controllers (main and redundant) with a QNX real-time operating system for reliable operation and optimal performance. If the active 625-151 controller fails, the second controller immediately takes over. All modules in each 625-800 unit are front-loading and hot-swappable. A variety of audio interface inputs and outputs can be installed in the 625-800: AES3, MADI, Balanced analog I/O, analog microphone input.

NTP Technology develops, manufactures and distributes broadcast-quality digital audio routers, signal processors and control software for the world market. The company was established in 1958 and is a major supplier of high-reliability audio routing systems for major international broadcasters. NTP products are integrated into television and radio stations as well as major production centres, post-production facilities and outside broadcast vehicles.