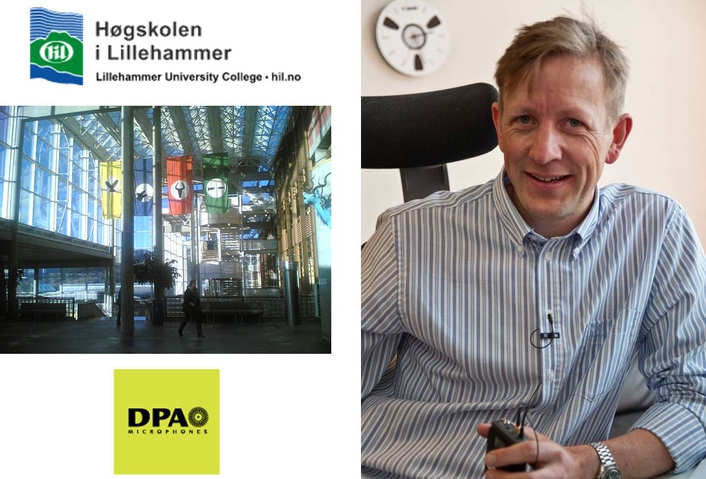 Supplied by DPA’s Norwegian distributor Lyd-Systemer AS, the new microphones are being used with Senheisser wireless systems, including eight channels of stationary wireless receivers for multi camera applications. Originally designed for use with wireless systems in theatre, television and close-miked instrument applications, DPA’s 4060 miniature microphones are exceedingly accurate and highly unobtrusive.

Erik Sutterud, Technical Supervisor at the Television School, says: “Every time we purchase new equipment we research the market to look for the best products. A manufacturer that specialized in one type of product is likely to put more effort into its equipment than a company making a wide variety of products. This was the reason why we chose DPA. We also based our choice on our our previous good experiences with the company – we already own a number of DPA microphones that are among the finest in our collection. If a manufacturer’s equipment has proved to be reliable, it makes sense to go with the same manufacturer again.”

Based at the University College of Lillehammer, the Norwegian Television School offers BA and MA degrees in Documentary Film Making and Multi Camera Production. Students are using the new DPA microphones for guest talk shows and to record characters taking part in documentary films. As both the students and the people they are filming are often inexperienced with microphone technology, it was imperative that the chosen system was hard wearing enough to withstand heavy use.

“All students need to make a mistake or two before they master the equipment and learn to handle it properly,” Erik Sutterud says. “With this in mind, we need to be sure that any equipment we buy is tough enough to withstand student use. The DPA 4060 microphones are ideal because the sound quality is great and the connectors are smaller, more rugged and more flexible and therefore less likely to suffer if they get bent or knocked during operation.”

The Norwegian Television School is renowned for its exceptional results with graduates going straight into film production in all major television companies. They also represent a major part of the country’s freelance film making community.

An audio engineer and Pro Tools expert in his own right, Erik Sutterud has been with the Norwegian Television School since 2006. As well as looking after the facility’s audio equipment, he also lectures in analogue and digital audio and post production techniques.

An audio engineer and Pro Tools expert in his own right, Erik Sutterud has been with the Norwegian Television School since 2006. As well as looking after the facility’s audio equipment, he also lectures in analogue and digital audio and post production techniques.

“DPA Microphones - and previously Bruel & Kjær - have delivered excellent products for decades. Among our collection of microphones we are proud to own four 4006 microphones with sequential serial numbers and two 4011 microphones. These are about thirty years old and following their last service at DPA they are now in ‘as new’ condition. Over their lifetimes they have captured some great recordings and are among our best investments.”