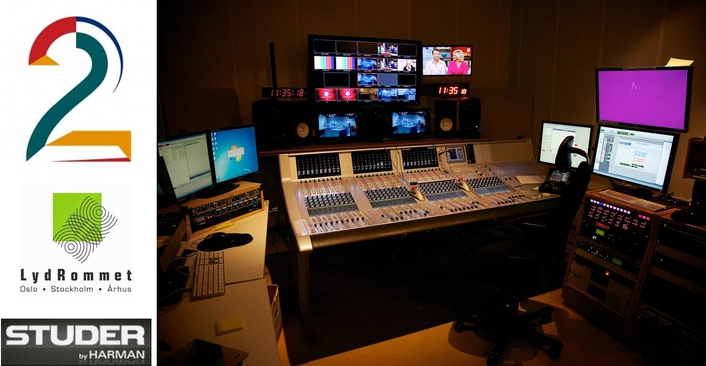 .
Ever since TV2 in Norway purchased its first HARMAN Studer mixing console in 2005, Norway’s biggest commercial TV channel has enjoyed a strong relationship with Studer and Norwegian Studer distributor LydRommet AS. The ensuing series of Studer purchases and upgrades demonstrates TV2’s ability to protect its investment with high-quality, efficient solutions.

TV2 invests heavily in system automation. For example, with its Mosart playout system, TV2 controls the OnAir 3000 consoles via the Studer Monitora protocol. This gives the engineer the freedom to work on sound quality, camera and lighting, without worrying about opening the right fader at the right time. In Oslo, the engineers are controlling the studio microphones from the console extension, before sending the feed to an audio group that is controlled by Mosart. Also, with the implementation of the EMBER protocol in the Vista 4.9 software, Bergen now controls even the Vista 8 consoles with Mosart.

And it continues, as TV2 Bergen is now installing a 22-fader Vista 5M3, which will network with the Vista 8 over RELINK.

“The relationship with TV2 exemplifies more than just one customer’s commitment; it also shows how the Studer platform enables customers to protect their investments,” said Espen Andersen of LydRommet AS. “TV2 is a technology-driven broadcaster constantly seeking better and more efficient solutions, and all the way the Studer mixing systems easily adapt through software and hardware upgrades.”