No Joke: MTV's "PUNK'D" Pulls Off Punks with Clear-Com 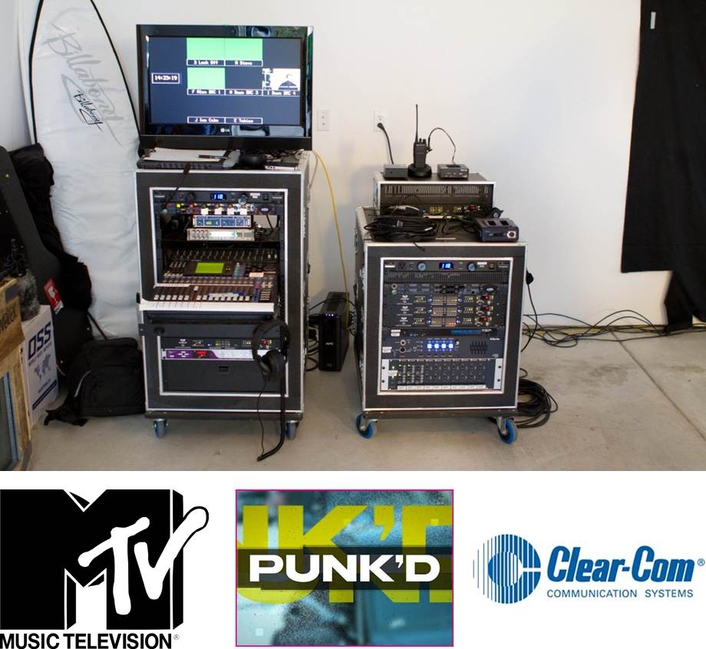 Coffey Sound, a Trew Audio Company, a Clear-Com dealer and Clear-Com Global Rental Group Partner as well as one of Los Angeles’ leading sources of audio equipment in the entertainment industry, designed the one-of-a-kind communications platform and supplied the intercoms for “Punk’d”. The production team is relying on the Eclipse-PiCo, Encore, and Optocore systems to achieve a faster intercom set-up, efficient signal distribution, and higher productivity.

During pre-show preparation and while in production, the director, executive producer, backup producers, video engineer, hidden camera operator and audio technicians utilize the Eclipse V-Series panels to communicate with one another. The director provides cues for the talents, who are using hidden microphones and IFB earpieces, while coordinating with the producers and camera crew on two-way radios and Encore RS-603 wired beltpacks.

The V3R-FX-INTERCOM and X6R-FX-INTERCOM devices provided a high speed interface for the Clear-Com system along with all other audio network circuits via fiber and CAT5, permitting centralized management of the distribution network. The Optocore interfaces also allowed fast, intelligent routing of audio, data, video and intercom signals over the integrated systems in real-time with the added benefits of dual fiber redundancy, ultra-low latency, and high bandwidth. This solution decreased the number of cables required to link the voice communication systems and the intuitive, plug and play design of the Clear-Com systems dramatically simplified the complexity of cabling. 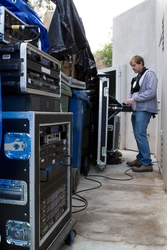 “Since “Punk’d” is a hidden camera show, our communications set-up and production are even more complex than a typical TV show configuration. With the combined Clear-Com and Optocore solution, our setup time was reduced by 50 percent, lowering the production costs,” says Gary Vahling, Rental Manager, Coffey Sound. “With the Eclipse-PiCo, we gained access to a variety of useful functions and capabilities, which increased our performance output and supported a highly personalized production experience.”

Clear-Com’s Eclipse matrix intercom system was configured to meet the changing communication demands of this sophisticated production. V-Series panel users can instantly and effortlessly redirect their audio, alter their key assignments, and re-adjust labels as their production needs changed from day to day. The production team was also able to customize communication paths on the Eclipse-PiCo and V-Series panels for specific talk groups, isolating private conversations between the director and camera operators, the producers and actors, and the video engineer and cameras operators. The convenience offered by the highly flexible Eclipse matrix system increased productivity for the “Punk’d” production crew well above their previous seasons of filming the show.

“Clear-Com’s utilization of the Optocore solution is a strategic tool for helping “Punk’d” become more efficient,” says Jaz Wray, Regional Sales Manager, Southwestern USA and Latin America, Clear-Com. “The easy to deploy, simple to manage, and feature-rich, system design frees up time so the production team can focus on the concept for each show, capturing their audience, and pulling off an epic punk on an A-list celebrity.”

About Trew Audio
Trew Audio is devoted to the art of location sound recording for film and television. Founded by sound mixer Glen Trew, Trew Audio was designed to fill the widening gap between sound professionals and support services that has grown as film and video production has become less confined to Hollywood and New York. With four locations in Los Angeles, Toronto, Vancouver and Nashville, Trew Audio is a leader in the sales, rental, and service of audio equipment for professional film and video production in markets worldwide.