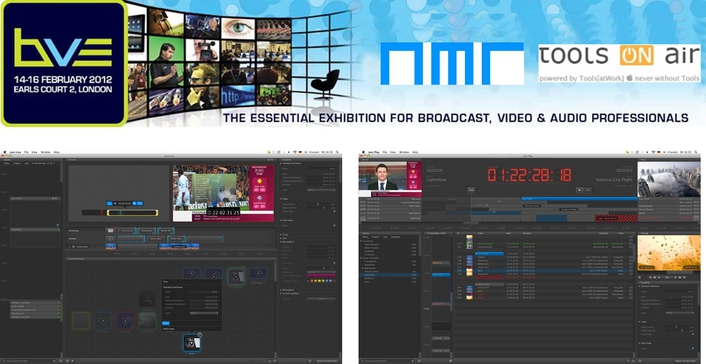 For hands on demonstrations of ToolsOnAir's products, please visit NMR's stand B26 at BVE 2012
NMR - a leading  value added reseller and systems integrator of complex post-production and broadcast solutions - and Zest4TV, an agile and cutting edge live events hire company, will be demonstrating the full suite of Apple-based broadcast solutions from ToolsOnAir, on stand B26 at Broadcast Video Expo (BVE) 2012 at London's Earls Court Exhibition Centre.

They will be demonstrating a portable multi-channel tapeless recording system using ToolsOnAir's Just:In Multi ingest application, along with their unique LiveCut multi-camera EDL recording solution, for the fastest turn around of multicam edits.

On the play out side, NMR will demonstrate the ToolsOnAir Just:Live video playback and real time graphics system, designed for live events production, along with the new "TV Station In A Mac Mini" solution, which is highly cost effective and is based on ToolsOnAirJust:Play 24/7 broadcast server software.

NMR's Business Director Neil Anderson says "Since bringing ToolsOnAir's products to the UK, we have had considerable success deploying the solution into a wide variety of places including the BBC, ESPN, MTV, The Financial Times, The Daily Telegraph, Twickenham RFC and many others. ToolsOnAir software is easy to use, yet powerful, cost effective and scalable using off-the-shelf Mac hardware and standard 3rd party products from the likes of AJA Video and BlackMagic Design. With Local TV about to finally become a reality in the UK, ToolsOnAir is ideally positioned to provide a complete end-to-end solution, at a sensible price point."

Just:Play is ideally suited for deployment into niche broadcast TV channel markets, such as cable TV, religious channels, sports venues and auditoriums and will be perfect for small TV stations following the launch of "Local TV" in the UK, later in 2012.