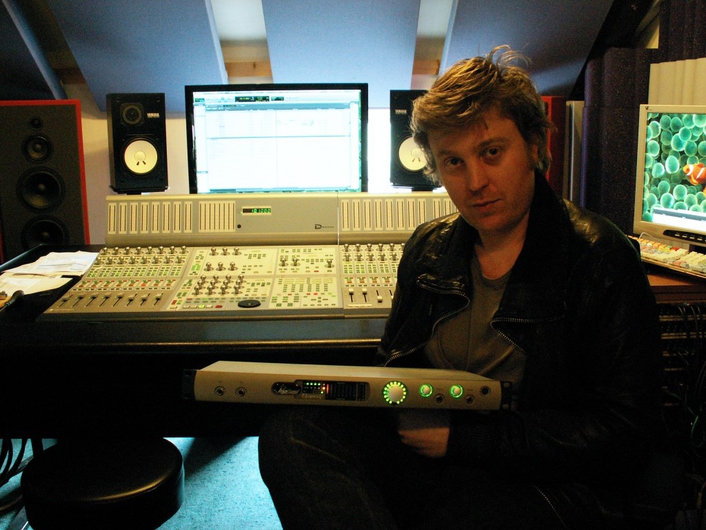 Marc Canham at Nimrod With Orpheus
Nimrod Productions has invested in a Prism Sound Orpheus FireWire computer interface, which it is using on a variety of projects including film mixes and soundtracks for video games.

Based in Oxfordshire, Nimrod Productions has three studios, the largest of which is equipped with a Neve V51 console, a HD3 Pro Tools rig with ICON control surface and an extensive range of outboard equipment. The second room is equipped with Nuendo and Pro Tools and is used as a composition suite by film and video games composer, Marc Canham, whose work includes the acclaimed UK movie The Disappearance of Alice Creed, Far Cry 2 and Secret World. The third studio is an ‘all in the box’ video and sound editing suite, which is generally manned by engineer and project manager Ed McClements.

Nimrod Productions runs a studio-based orchestra, the NSO, and has a London-based Voice Over agency, Mana, Sound Ltd, which has its own studio where it records voice intensive projects for clients such as Wii Fit. The company recently established Nimrod Music Licensing and also extends its facilities to artists, including new acts such as Little Fish, Ex Why, Tragic Toys, etc.

Production Director Richard Aitken says: “We set up Nimrod Productions 10 years ago and are now regarded as a boutique music production company because we tend to go for left field and high end projects. Our client base is very diverse and includes video game companies, movie houses, TV networks and record labels such as Cinema NX, Fox, Sony SCEE, Ubisoft and Universal Music.”

The decision to invest in a Prism Sound Orpheus FireWire computer interface was taken earlier this year when Marc Canham decided to upgrade the conversion in his room.


Richard Aitken explains: “For me, Prism Sound has always been a brand of excellence. I use Prism Sound ADA-8XR converters every time I'm in Abbey Road, where we do a lot of recording. When it came to upgrading Marc’s room, choosing Prism Sound was a no brainer. I handle the post production and d-mix work on most of Marc’s projects and I was getting a little tired of his old conversion system. I needed a great front end for his recordings and the fact that Orpheus has excellent preamps is a stunning bonus.”

One Orpheus unit has now been installed and Nimrod Productions will soon be investing in a second unit for its Voice Over studio. Aitken would also like to install an ADA-8XR in his own studio, which he would like to integrate with a CLASP tape system.

“I do my mix work in DAW land with Pro Tools HD. I want to be able to experience the same things I get in the other rooms with the Orpheus, so HD/ADA-8XR is the way I’d like to go eventually.”

Apart from pristine sound quality, Aitken says the best feature about the Orpheus is its clean preamps.

“The Orpheus is just an all round great product and one that I would highly recommend. Since installing it, I am getting much cleaner and more useable recordings from Marc’s room and these are requiring much less EQ carving to make them work. Marc likes to record very mid heavy sounds, which cheaper converters just don't seem able to render very well. The AD conversion on the Orpheus is, of course, amazing, but the mic amplifiers are just right for high end work - very clean and versatile.”

Since installing Orpheus, the unit has already been used on a new movie currently called Speak No Evil and on the soundtrack for the video game Secret World.

“Prism Sound’s staff have been incredibly helpful throughout this process and I am now a big supporter of the company,” Aitken adds. “Orpheus is brilliant and all I can say is that I should have bought one ages ago!”