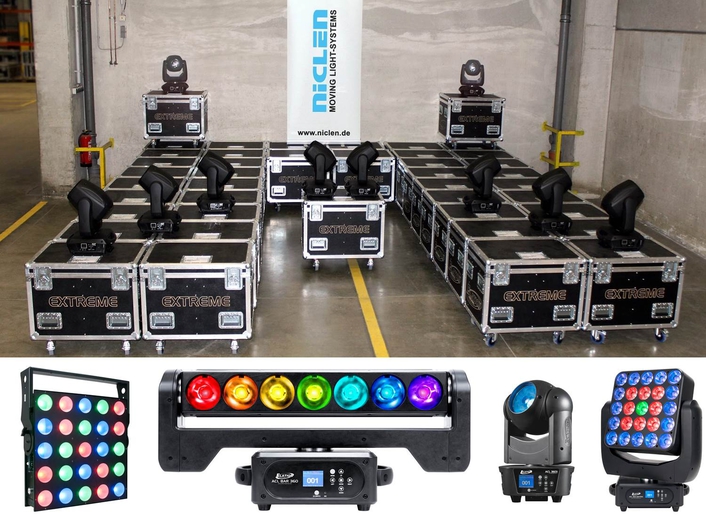 Niclen Moving Lights System GmbH continues to increase its stock of Elation Professional lighting equipment with the recent purchase of Elation ACL 360i™, ACL 360 Bar™ and ACL 360 Matrix™ LED effect lights, as well as Cuepix Panel™ LED matrices. The ACL fixtures are part of Elation’s increasingly popular ACL Series of high-output, narrow-beam LED effects that are seeing use in a wide variety of touring and special event applications. The Cuepix Panels are LED matrix blinders featuring 25 RGBW LEDs per panel.

“Lighting fixture types like the Elation ACL Series are very popular at the moment,” stated Niclen CEO Bodo Valasik. “We were looking for a good series of effect lights with very good ROI but with no compromises in quality, also durable enough to withstand an often tough touring environment, and the ACL Series fulfilled those requirements.”

The ACL Series fixtures house an advanced collimator optic that produces a dense 4-degree color-changing beam from each lens. The ACL 360i, the latest and smallest luminaire in the series, is a powerful single-beam moving effect useful for quick-moving beam looks, pinspotting, or large motion effects when used in larger configurations. It is exceptionally fast with continuous 360° pan and tilt movement and includes frost lens options for color washing applications. The ACL 360 Bar is a versatile moving head with continuous 360° rotation useful for dynamic movement effects or can be used as a pixel bar for displaying imagery or as a wash luminaire for floodlighting surfaces and stages. The ACL 360 Matrix is a moving head effect luminaire with a 5 x 5 matrix face of 15W RGBW LEDs and fast, continuous 360° rotation for dynamic movement effects.

“Niclen values offering their clients new and innovative effects and that’s exactly what they get with the ACL Series,” commented Marc Librecht, Sales & Marketing Manager for Elation Europe. “The ACL Series has struck a chord with designers as they are highly flexible effects that can be used on all types of shows and stages, but it’s also popular with rental companies because it is a high performance / high ROI solution.”

Niclen is located in Dortmund in western Germany and partners with nearly every production company in Germany to carry a complete stock of moving heads, effect lights, LED video and trussing.