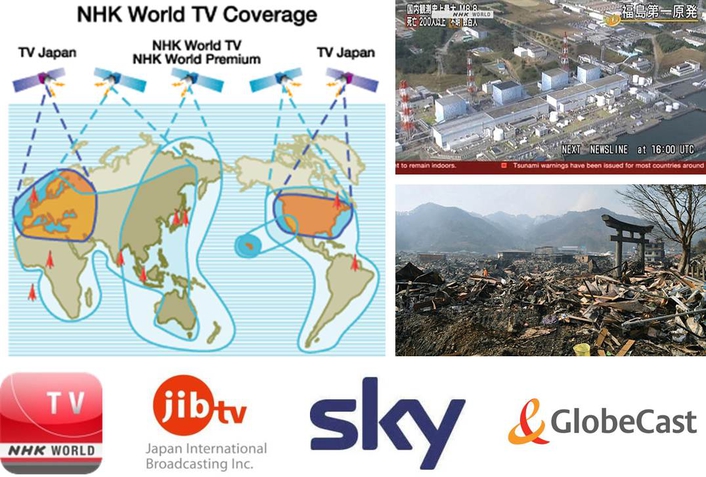 The live video coverage of the earthquake and tsunami which hit Eastern Japan on March 11 displayed the power of HD television
GlobeCast and Japan International Broadcasting, Inc. (JIB) announce thatNHK WORLD HD has launched today on the Sky and Freesat platforms in the U.K. GlobeCastprovides re-encoding, uplink, and capacity on Eutelsat's EUROBIRD™ 1, bringingthe channel to a new community of over 10 million Sky subscribers, and over amillion Freesat viewers.

The NHK WORLD HD feed isdownlinked in France at GlobeCast's Bercenay and Sainte Assise teleports, andsent via fiber on GlobeCast's Backbone Network (GCBN) to the London operationscenter, where the video is re-encoded and AC3 audio is added. The channel isthen uplinked to the EUROBIRD 1 satellite for the Sky platform.

GlobeCast already provides turnaround and satellite capacity for NHK WORLD TV in standard-definition format, as well as delivering NHK WORLD in HD on a number of IP platforms in Europe.

With two of the world's threelargest economies located in Asia, NHK WORLD TV delivers a unique geographicand cultural perspective on important developments in this highly influentialregion. The recent crisis in Japan resulting from its greatest natural disasterproved the value of NHK WORLD TV and provided aninvaluable service to people throughout the world. Powerful HD images andinformation about fast changing events were broadcast live on NHK WORLD TV toan audience of over 137 million potential households in more than 120 countries.

"The live video coverageof the earthquake and tsunami which hit Eastern Japan on March 11 displayed thepower of HD television extensively," said Hatsuhisa Takashima, presidentand CEO of JIB. "Now we are able to make this state of the art technologyand powerful English language news coverage available to the television viewersin the U.K. through our partnership between GlobeCast and JIB. I am sure thatNHK WORLD HD will bring evidence of Japan's recovery from this history-makingnatural disaster in the months and years ahead to the eyes of British people.Their compassion and generous assistance extended to the victims and has been greatly appreciated by the Japanese people."

JIB, a subsidiary of NHK, is the exclusive distributor of NHK WORLD HD throughout theworld. NHK has newsgathering operations throughout Japan, Asia, and elsewherearound the world, including 30 international news bureaus. Newsline,focusing on news events in Asia and the world, airs live from Tokyo at the topof every hour. Additional original content including business, technology,fashion, food, travel, and other cultural programs designed for global audiences,are broadcast in four-hour cycles suited to time zones around the world.

A subsidiaryof France Telecom/Orange, GlobeCast is a leading provider of media managementand global content delivery services for broadcasters and content creators.With a secure fiber and satellite network connected to dozens of teleports,technical operations centers, and points-of-presence worldwide, GlobeCastmanages and transports millions of hours of video and other rich media eachyear. An integrator of audiovisual technology and a full service provider,GlobeCast works with all the actors in the audiovisual chain from productioncompanies to broadcasters, retail organizations, cinema chains, and more. Thecompany provides on-site service from major news and sporting events forcoverage in SD, HD, or even 3D. Present in Europe, the Americas, the MiddleEast, Asia, Africa, and Australia, GlobeCast is also an expert in internationaltelevision markets, and works with new and established broadcasters to reachand secure distribution with leading pay-TV operators around the world.