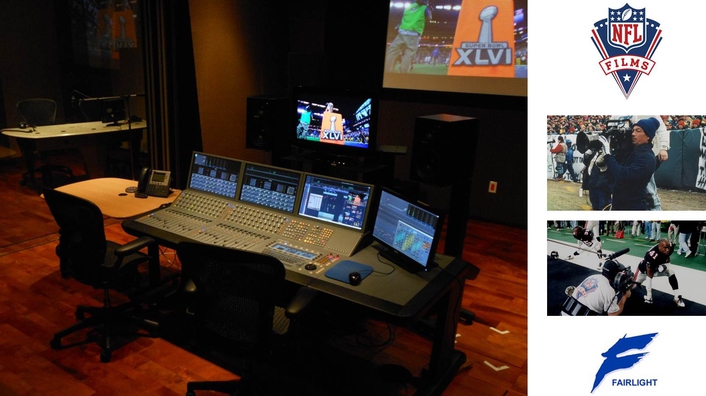 A Winning Strategy to Deliver Outstanding Production
In order to achieve the highest level of audio quality in production and post-production of sports-themed entertainment and documentaries, NFL Films utilizes Fairlight’s EVO and Xynergi consoles to create material for the National Football League’s weekly highlights, analysis shows and documentaries featuring the league’s greatest players and performances.

At its Mount Laurel, NJ facility, NFL Films occupies 16 audio suites for production work, using the Xynergi console with the addition of five EVO’s in the past 18 months. “Our engineering staff was able to add the EVO consoles into our Xynergi rooms with very minimal downtime,” states Vince Caputo, Supervising Sound Mixer at NFL Films. “We knew the software and automation well, so adding the EVO control surfaces was an easy upgrade operationally as well.”

During the season, NFL Films produces weekly shows for a variety of outlets including NFL Network, ESPN, Showtime, The NBC Sports Network and Velocity. Their work in featured on programs such as NFL Films Presents, Inside The NFL, NFL Turning Point, and SoundFX.

NFL Films also produces documentaries and specials for HBO, such as the Emmy Award winning Lombardi, the recently premiered Namath, and the hit reality series Hard Knocks, a behind-the-scenes look into NFL training camps. Their America’s Game and A Football Life series both run on NFL Network, and have garnered critical acclaim.

Sonically, the Fairlight product has always been brilliant, but the other main attraction for us is speed,” Caputo continued. “The bulk of our work is straight up editing of dialogue and nat sound, general track prep and sound effects placement. For all of that, the speed and flexibility of the Xynergi is unmatched. We also rely on the clip-based DSP, so that when we reach back in to our archives for a sound clip, we can import it with all of the work done, level, eq, rendered plug-ins, fades, etc. That saves us from having to do that same job twice.”

Combining the Xynergi with the EVO has only made the process easier for NFL Films, allowing the editing and mixing process to overlap. “There is much less delineation between the pre-dubbing and mixing processes, the mix is always on.” Simultaneous work helps to keep workflow moving, which is crucial for the NFL team.

Fairlight is an integral part of how NFL Films operates, as shown by their dedication to the products for nearly 20 years. “Our Fairlight network and file server are at the core of our audio operation. The server houses all of our shared data, sound efx libraries, HD video that we simultaneously stream from multiple rooms, and archives dating back over 20 years. Very little data is stored locally, making it fast and easy to work on the same project in multiple rooms,” Caputo mentioned.

For Caputo and the rest of the team at NFL Films, the ‘Fairlight way’ of operating is the only way to do it. “Our audio infrastructure and workflow are built around the Fairlight operating system. There are so many unique features in the Xynergi/EVO combination that you can’t find elsewhere. If you never had them, you wouldn’t miss them, but once you get used to that power, you can’t do without it.”

Caputo explained the long-standing relationship with Fairlight and how NFL Films has contributed in driving product development. “They trust us to give them reliable feedback, and have used it to implement features that are beneficial to us, as well as all of their end users. It is a powerful relationship we are proud to have.”