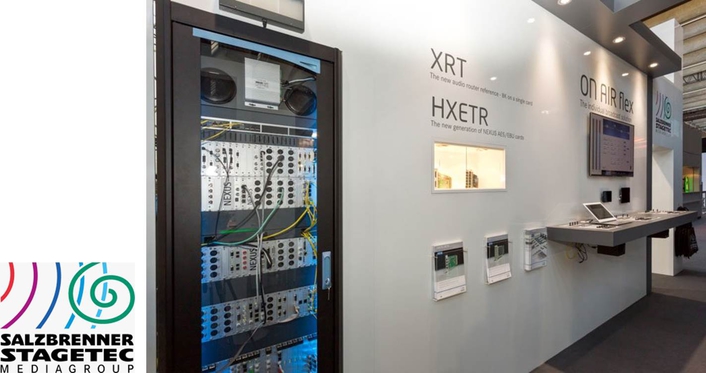 The new audio router reference – 8k on a single card
STAGETEC, the digital mixing console and audio router expert, introduces the new XRT board for NEXUS audio networks. A true routing giant for more than 8 000 channels of audio, it takes the NEXUS routing decentralisation concept to an even higher level than before.

Previously, the maximum number of signals that could be routed in a NEXUS Base Device was 256. The new XRT board now expands the connectivity and creates a routing capacity of unimagined size for fibre-optic networks, irrespective of the local routing of a Base Device. This increases the packing density of the already very compact NEXUS.

The XRT board is equipped with 12 fibre-optic ports to route the many I/Os to and from the device. Its power and capacity have increased significantly over the previous NEXUS fibre-optic network and this lays the foundation for a new generation of fibre-optic boards. The 12 fibre-optic ports of the XRT are divided into six high-capacity ports for up to 2 048 audio channels per fibre-optic cable and six ports for up to 512 audio channels. The new board retains backwards compatibility with the previous connections. This means it not only connects to XRT boards in other Base Devices but also to conventional NEXUS FOC ports.

The high degree of connectivity and extraordinary routing capacity makes it possible to create complex NEXUS networks. So, from now on extremely high-capacity network structures are possible in ring or mixed topologies, forming particularly reliable audio networks, in addition to the star topology in common use previously.

In essence, a NEXUS Base Device can manipulate up to 256 signals. These will be routed out of the XRT board and fed to the TDM bus, where any I/O board or other module can pick them up and use them. The other XRT signals do not use any time slots in the TDM bus. They can be routed within the XRT and distributed to other Base Devices without reducing the local routing capacity of the Base Device. The NEXUS Base Device manages both local audio routing to the I/O boards installed and high-performance networking and signal distribution between Base Devices.

The principle is also ideally suited to achieving cable redundancy when connecting Base Devices, and does not consume time slots or router switching capacity.

Its fibre-optic connections can be used for other services as well, such as Ethernet tunnelling with a transfer rate of up to 1 Gbit/sec. Among other things this can be used to integrate the signal routing of an oratis intercom and commentary system into the NEXUS fibre-optic network.

The STAGETEC NEXUS XRT board is a versatile giant that fits into any 3 U sized NEXUS Base Device and is another milestone in the long string of innovations from the Berlin-based high-tech developer.