NEXUS with SDI Board for Premium Productions 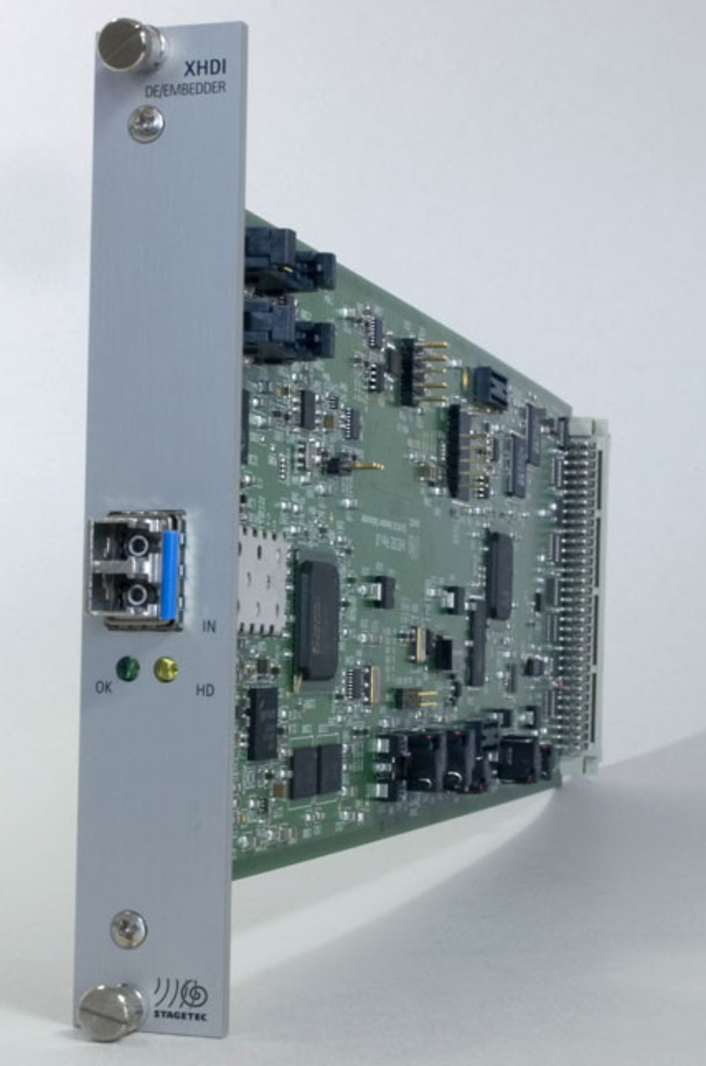 XHDI 02 Board for NEXUS Router
For the first time, SALZBRENNER STAGETEC MEDIAGROUP presents the new XHDI 02, a plug-in card for the NEXUS audio network, at prolight+sound. The XHDI 02’s most outstanding feature is compatibility with each and every SDI format specified by the current standards. The various formats differ greatly in data rate, varying from 270 Mbit/s for SD-SDI, 1,5 Gbit/s for HD-SDI and up to 3 Gbit/s for the new 3G-SDI. The latter is required for productions in the 1080p50 (or 1080p60) formats, which are used in the premium broadcast segment and for digital movie production. Both are areas where NEXUS is often to be found at the heart of the audio installation.

Like other NEXUS SD-SDI and HD-SDI boards, the XHDI 02 de-embeds, processes and re-embeds all the audio accompanying the video from and to the SDI stream and also offers a multitude of other useful functions. The NEXUS XHDI 02 board can be equipped with sample-rate converters and is then able to de-embed the audio even from asynchronous video signals and re-embed them again.

Dolby E®signals can be accommodated, by combining the XHDI 02 with an XDED (neXus Dolby E® Decoder) board. The Dolby E®signals are de-embedded, decoded, mixed and processed, if required, in NEXUS, then re-encoded and re-embedded. This procedure is also applicable to asynchronous SDI signals. As a further unique feature, the board has the ability to compensate for the delays inherent in the Dolby E® decoding and coding process. This ensures that video and audio are always in perfect lip-sync.

XHDI 02’s comprehensive functionality introduces a welcome simplification to the workflow, which could otherwise only be achieved with additional external devices!

A number of major broadcasters — for example, ARD in Germany, — have announced their intention of making their NEXUS installations capable of dealing with the 1080p50 and 1080p60 video formats and 3G-SDI, and to use them as the formats of choice for their most important productions as soon as HD becomes a regular broadcast format. Others, such as tpc and RTS in Switzerland and an important American sports broadcaster have already completed this transition and are already using the brand-new NEXUS XHDI 02 boards.