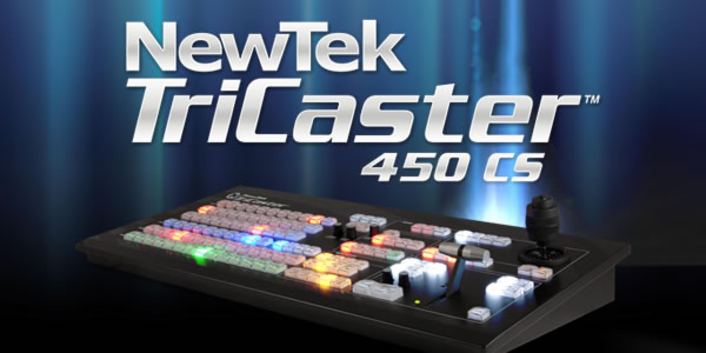 “The TriCaster 450 CS gives broadcast professionals the high performance, hardware interface they expect to find in a traditional television control room,” said Andrew Cross, NewTek CTO. “Our users can access all of the power in the system from HD virtual sets and multi-track recording, to one-button streaming and more, without ever touching a mouse.”

With TriCaster, anyone can simultaneously produce, live stream, broadcast, project and record HD and SD network-style productions. A single operator can switch between multiple cameras, virtual inputs and live virtual sets, while inserting clips, titles and motion graphics with multi-channel effects. TriCaster is used by broadcasters, schools, sports organizations, houses of worship, government agencies and others to provide a new level of extended programming and content to their audience.

Intuitive Control Layout allows the TriCaster 450 operator to have physical control of all sources. Back-lit buttons, twist knobs, a premium T-bar and three-axis joystick provide a hands-on connection to the functions and effects available from the TriCaster 450 interface.

Media Player Controls provide immediate access to the four digital media players. Use the illuminated buttons to select from the DDRs, graphics store, and sound player, cycle through presets and manage playback options.

Positioner Controls include a three-axis joystick and back-lit buttons that allow position, full 3D rotation, scale and crop of sources, plus manual control of the virtual zoom, and the ability to jog or shuttle the selected media player.

Transition Controls allow transition from one multi-source composition to another, manually or automatically. Cycle through transition styles and speeds, and then use the T-bar or illuminated buttons to view the desired source.

One-Button Streaming allows use of Adobe® Flash® or Microsoft® Windows Media® to deliver a live stream directly to the Web.

One-Button Recording captures content from a live production at full resolution, with a back-lit button that shows when the Record function is live.